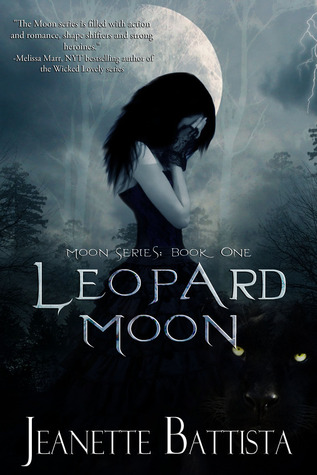 How do you disappear when you come from a family of predators?

A wereleopard, Kess is forced to flee her home and family in Miami once her brother's obsession with her turns violent. She runs from city to city, trying to stay one step ahead of the investigators her family has dispatched to bring her home. Kess ends up in the mountains of North Carolina and attracts the attention of Cormac, a young man with a secret of his own. As she attempts to live as normal a life as her were-nature allows, her brother Sek continues to hunt for her. He believes she is the key to revitalizing their weakened clan and is driven to extreme measures to ensure their continued existence. As Kess' relationship with Cormac deepens, Sek closes in, threatening Cormac's life and Kess' freedom.

When the moon rises, the hunt is on….

I really do enjoy a good shifter story. Doesn’t really matter what kind of shifter either. The premise of leopard shifters, sold me on reading this one. This book features a seventeen year old girl, Kess, and nineteen year old boy, Cormac. However I wouldn’t considerate it a true YA book-perhaps ages 16 up would be more appropriate due to some of the subject matter and violence.

Kess has run away from her family and leopard clan. The reason? Her crazy brother’s decision that leopards should mate within the same bloodline-namely him with Kess. Of course the Alpha of the leopards, Kess’s father, isn’t aware of any of this. So Kess is on the run, complete with private detectives searching for her. She finds herself in a small out of the way town in North Carolina. She meets Cormac, and although she tries to keep to herself, she starts to care about him. What she doesn’t know is, Cormac has his own shifter secret.

For the most part, I enjoyed this story but there was a couple of things that bothered me. One was that it was a pretty slow read for me. I just kept putting it down for days at a time. Never a good sign for me. And the second thing hit home for me, when after putting the book down for awhile and coming back to read it, the ages of the main characters were mentioned again and I was really surprised. The characters are good characters but neither one acts in any way like a teenager. I had completely forgotten how young they both were. I understand that Kess had to grow up fast on the road, but it just seemed a bit strange that both characters had no teenage qualities. Well, actually maybe that’s a good thing-maybe just a bit unrealistic!

I am happy to say, that once I got to the 50 percent mark, the story did pick up and by about 70 percent, it was a much faster paced read, with a lot more going on. This is a series with lots of good secondary characters, however the bad guy in this book is just despicable and not the norm for a YA book in any way that I am aware of! Not sure who the next book is going to be about, but I do know that at least some of the same characters continue on with the story. Kess’s story isn’t over yet and the ending left the reader wondering what was going to happen next. And because the story did get a lot better, I am interested enough to buy and read the next book when I get a chance. And on a side note, for a indie published book, I found this to be very well edited.