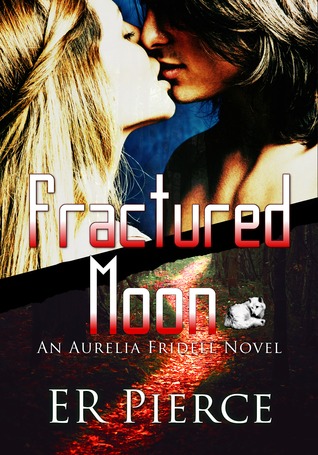 Aurelia Fridell is a freak. The only werewolf who can't shift.

As her thirtieth birthday approaches, isolation creeps in, and worry settles in her gut. She accepted her status long ago, and yet lately, she's felt off-kilter. Eyes follow her, prickling her senses, and her headaches are getting worse.

Is she paranoid, or is someone, or something, stalking her? Watching. Waiting. Drumming fingers to a sinister beat she can't hear.

Ceithin Starkley isn't looking for a mate. Especially now. In fact, he doesn't believe in true-matings at all. While being recruited for a new job, a scent on the wind stuns him, and he begins fighting an inner battle he never wanted, yet can't ignore.

Warning: This book contains a drool-worthy Alpha male, and a sassy heroine with brains and brothers you'll adore. A best friend every girl would love to have, and a terrifying road no one will see coming. Author's note: Fractured Moon has been rewritten from its original manuscript published in 2012 and republished May 26, 2014. This is 76K novel.

Fractured Moon is book one of the Aurelia Fridell Duology, with book two currently being written, titled "Moon Justice". There will be one novella and two short stories featuring characters from Fractured Moon.

Ever read a book and around eighty percent of the way in, it takes such a completely 360 degree spin, that you end up really questioning why the author chose to go in that direction? That’s what happened to me with this book. I was really enjoying the read and then it was like, WHAT? Did that just happen? I guess that’s a sign of a good story teller though, because I never in a million years saw this one coming. Intrigued yet? And here I thought I was just reading a really good paranormal romance. WRONG!

Aura is the daughter of an Alpha wolf, owns her own bookstore, spends more then her share of nights out with her best friend, Astrid, and oh yeah, has this huge problem. She has never been able to shift. Thankfully she has a big family that loves her, otherwise the rest of the pack would be her undoing. Pretty much bullied her whole life, she knows she will never find a wolf that will mate with her. When she meets a man from out of town, Ceithin, all that changes. Of course he has brought his girlfriend along on the trip and he’s not a cheater. Things do get interesting!

I liked the premise of Aura being a wolf that can’t shift, but really hated the bullying aspect. Of course it probably has a lot to say about the bullying in our schools today-well that’s where my mind went while reading it anyway. The bullying is mainly her memories, so don’t let that make you shy away from this.

I enjoyed getting to know the characters of Aura, Ceithin, Astrid, and all of Aura’s family. Besides her not being able to shift, her twin brother Ville, has a different sort of thing that happens when he shifts. Aura and Ville are also able to mentally talk to each other. Which gets me to the world building. I thought the back story of the world of wolf shifters was well imagined by the author. Most of it was pretty typical, but still nicely woven into a good story line. The author also introduces another paranormal creature that was pretty different.

There was an aspect of the story that was pretty unbelievable, and I am not even talking about the paranormal aspects. I don’t want to tell any specific spoilers because that would be no fun. Suffice it to say, it involves something Aura owns. If you read this, I think you will understand.

If you like your paranormal romance to have more of a story then just romance and sexual situations, then this book might be a good read for you. Don’t get me wrong, there is some pretty steamy parts as well. There’s also a mystery involved and some real surprises along the way. It is also part one of two, and I definitely will be reading the next one because I really want to know where this story is heading. Oh, and it really wasn’t a cliffhanger!