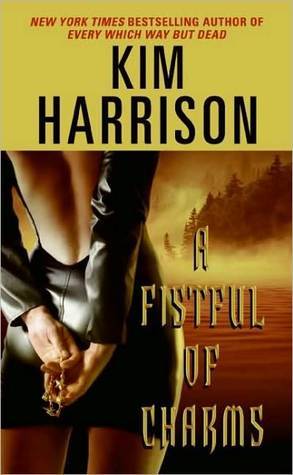 The evil night things that prowl Cincinnati despise witch and bounty hunter Rachel Morgan. Her new reputation for the dark arts is turning human and undead heads alike with the intent to possess, bed, and kill her -- not necessarily in that order.

Now a mortal lover who abandoned Rachel has returned, haunted by his secret past. And there are those who covet what Nick possesses -- savage beasts willing to destroy the Hollows and everyone in it if necessary.

Forced to keep a low profile or eternally suffer the wrath of a vengeful demon, Rachel must nevertheless act quickly. For the pack is gathering for the first time in millennia to ravage and to rule. And suddenly more than Rachel's soul is at stake.

I’ve come to expect a certain kind of action-fueled, intricate, and well-crafted plot from Kim Harrison, and in A Fistful of Charms, the fourth installment of her The Hollows series, the breakneck pace and interconnectedness upheld all of my expectations.

And explode it did. But I’ll get to that later.

At the end of book 3, Rachel signs on as David (the lone Were)’s female alpha for insurance purposes (b/c as an independent runner, Rachel is practically uninsurable), and as a quick fix for David who is getting hassled at work for being a lone wolf, and not contributing to the Were population.

SO. He forms a pack with Rachel, who won’t hold him to the standard expectations that another Were would—relationships, babies, etc.—and problem solved. Right? Right.

The local alphas don’t think much of David’s loophole maneuver and decide to make an example of him. And by “him” I mean Rachel, b/c she’s the one who gets challenged by the alpha leader-backed female who wants to be David’s alpha in truth *waggles eyebrows* (as opposed to on paper, like Rachel). These early shenanigans with the Weres lay the groundwork for the upcoming interactions (shenanigans) with the Weres, who play a HUGE role in this book.

There’s also a lot of Nick. I don’t like Nick.

Nick aside, the premise for this book was awesome—an artifact that can unite the Weres and return them to a position of power among the Inderlanders has been “discovered” (*cough* stolen *cough*), and Rachel and Co. must find it, hide it, and prevent an Inderlander war.

If this idea sounds familiar, and you happened to have read the first book from Jess Haines’ H&W Investigations series, let me assure you that Harrison’s book predates Haines’ by four years, and if there was any theft of ideas, it wasn’t on Harrison’s part. That’s all I’m going to say about that.

So yeah, very cool, very easily identified plot. More character development across the board—for the first time, I actually like Ivy instead of merely acknowledging her presence. Aaaannndddddd . . . Jenks gets BIG.

Seriously, what could be cooler than BIG Jenks? Not much.

So why did I only rate this 3.5 stars when up to this point the other books have been a solid 4 stars?

Well . . . there’s a thing that Rachel likes to do that really bugs me (No, not the tomatoes thing *snickers* but good guess), and I haven’t mentioned it before now b/c up to this point it’s been a minor thing, and I ultimately love her, BUT Rachel likes to take responsibility for things that aren’t her fault. And the way she does this rationalizes other problems (or other people’s responsibility in the problems) until she is solely to blame.

I’m all for taking ownership of your actions. In fact, I probably hate blame-shifting more than Rachel’s convoluted rationalizations that manage to hold her accountable for things that are only marginally her fault (if at all). But what Rachel does is so far beyond ownership . . . it’s almost like when a leader sacrifices herself for the safety of her people. It’s this big, dramatic sense of responsibility, and by usurping that responsibility, she also belittles the choices of others.

So what is this big, awful thing that Rachel tries to take responsibility for? Well, I could tell you, but then I’d have to kill you. If you’ve read the book, then you know. If you haven’t read the book, READ THE BOOK.<——if you haven’t figured it out yet, all roads lead to the same place. *orbit gum smile*

I also don’t like the suggestion that Rachel had been harboring a secret desire for the Awful Thing to happen all along. I’ll buy that she needs to be in a relationship that’s dangerous and/or risky to stay interested, but the other thing . . . NOPE. Sorry, don’t buy it.

So again, GREAT premise, action-packed plot, BIG Jenks (*swoons* *drools*), lots-o-good stuff here, but also again, REALLY over the Rachel and Ivy drama. HOWEVER, I happen to know for a FACT, that it does end. So keep on swimmin’, little fishes . . . keep on swimmin’.

78 responses to “Review: A Fistful of Charms by Kim Harrison”