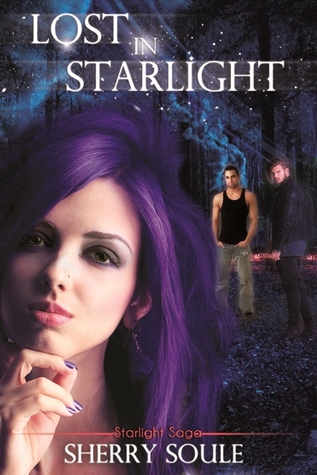 High school reporter Sloane Masterson knows she has one helluva story when she witnesses hottie Hayden Lancaster bending forks with his mind.

Like any good journalist, Sloane sets out to uncover the truth, even if it includes a little stalking. When the superhuman feats start to pile up and the undeniable heat rises between them, Hayden has no choice but to reveal his secret: he’s an alien hybrid.

They’re as different as night and day—she’s a curvy, purple-haired, horror junkie and he’s a smoking hot, antisocial, brainiac—yet the intense fascination between them refuses to go away. Even at Hayden’s insistence that dating each other is “off limits” and crazy dangerous, their fiery attraction threatens to go supernova.

Now Sloane’s dealing with creepy government agents, über snobby extraterrestrials, and a psycho alien ex-girlfriend out for revenge. After a crash course on the rules of interstellar dating, Sloane must decide if their star-crossed romance is worth risking her own life..

High school girl, check. Handsome brothers with otherworldly powers, check. Big crush on one of the boys, by girl, check. Girl stalking boy, check. Boy finally noticing girl, check. And the story is only just beginning. If you read this book, you will totally get why I started this with a check list.

Sloane is a fashionista, and pretty much is the leader of the goth/different girls at her high school. Her purple hair pretty much guarantees that she belongs to that group, although she does have a pretty face and most of the boys talk to her chest, instead of her face-much to her non-delight. She is hopelessly crushing on Hayden, when she witnesses him doing something very otherworldly. Instead of being scared off, the high school newspaper reporter that she is, becomes even more intrigued and continues stalking him in order to write a story about him. Because of the stalking, she starts witnessing even more things. And Hayden, being no dummy, realizes it and tries to put a stop to it. And of course, he begins to fall for her too.

Sloane’s voice(first person) in this book really made this a fun read for me. Snark, followed up with more snark. Love that. She writes a short weekly column for the paper about the horror movies that she loves, and they really added to the snark voice of the book as well. Snark voice? Well you know what I mean. I ended up really enjoying Hayden’s character as well. He’s the epitome of the perfect teenage boy, plus his abilities. The story has villains of course. In this case, one of them is actually Hayden’s brother, Zach, and I personally wanted to knock him upside the head, throughout the book. The writer does know how to make you hate a character, or I should say characters, because there are more then just one.

And while I am talking about the writer, I found this book to be well written, with good characters and a very interesting and yes, different premise. I am not the target age for this book-not by any stretch of the imagination-but I thought it was a good read. There was only one problem I had with the book. The main character is not a size 4, or even an 8, and is more like a size 12-14. That was refreshing for a change. But then people were making fat jokes to her face, and I thought that the target audience of teenage girls might have a problem with that. That was a fairly minor problem for me, and other then that, I did enjoy the book.

I am not going to ruin this by explaining anything to do with the otherworldly element(although if you read the blurb,there’s a spoiler, and I must of missed the blurb so it was a surprise to me-yea!). More fun for the reader to find that out themselves. It ended up not being exactly what I thought it would be, but just as different. For me, different is usually good. And I plan on reading the next book. Yep, there’s a cliffhanger, but not as bad as some.

15 responses to “Review: Lost in Starlight by Sherry Soule”