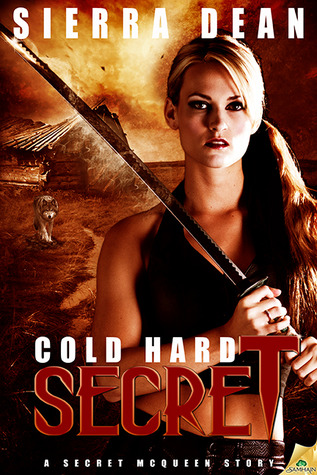 The Secret’s out, and heads will roll.

Ever since her near-death experience at the hands of the villainous Dr. Kesteral, Secret McQueen hasn’t been the same. As in damaged almost beyond repair. But as usual, Secret has no time to lick her wounds.

Armed to the fangs, she and Desmond embark on a whirlwind quest for revenge that takes them to the sewers of Paris to put an end to Alexandre Peyton. Instead, it’s almost the end of them, and before she can stop him, Peyton rips the veil off her deepest secret.

The devil’s not through muddling up the details, either. An eye-opening confab with Sig in the Big Apple leaves her wondering if she’s ever been in control of her own life at all. Plus, a cryptic postcard sends her racing back to her Manitoba hometown, fearing for her grandmere.

With the Council holding the power of life and death over her head, Secret’s circle of friends is shrinking, while the pool of enemies looking for payback is widening like a pool of her own blood.

Warning: Contains the least romantic Paris getaway in history and an unstoppable hybrid with an impossible choice to make between two men who’ve been to hell and back for her.


This book should have been called Secret’s Revenge instead of COLD HARD SECRET, but the latter works just as well I suppose given what happens in this installment. I say this because this series has had several long running baddies, and in this novel they all get what’s coming to them. OH YEAH! I felt like such a sadist while reading Sierra Dean’s latest because I couldn’t stop grinning like a lunatic as the body count continued to rise. After everything that’s been done to her, it was great to see McQueen getting her pound of flesh. That being said, there’s more to this book than straight-up retribution; her secret’s out, she finally chooses a man, and the cliffhanger will leave you floored. Batten down the hatches people, because this shit is about to get real.

As action-packed as this installment was, the emotional moments were just as poignant. Secret’s quite possibly irrevocably broken after her encounter with The Doctor, and it was painful to watch such a strong heroine brought to her knees. McQueen’s killing spree was practically therapeutic for her in a way because it allowed her to realize that she’s still got it. This series’ shifting love triangle has finally reached its conclusion, and as satisfying as it was, I’m skeptical that it’s really over. There is one more book left after all. Desmond, Holden, and even Lucas, get one last chance to fight for Secret’s affections, but only one wins and it’s not the one that made me cry.

About halfway through this novel, I looked back at all the passages I had highlighted only to realize that there was no way I was ever going to be able to pick my favourite COLD HARD SECRET one-liner. There were just too darned many! I can’t say that I’m surprised because this IS Sierra Dean we’re talking about, but after seven books (and two novellas) I love that she can still leave me reeling with a single sentence. Her writing, characters, and story have not waned one little bit, and even though I am sad that this series is coming to a close, I’m also relieved that SECRET MCQUEEN will be going out on top. As she should.

I loved how each epic battle was showcased to the fullest while also leaving plenty of pages left over for even more oh shit revelations. Dean has already started to tie-up loose ends which I really appreciated because it means that A SECRET TO DIE FOR won’t be weighed down by small details. After this installment’s cliffhanger ending, I expect the finale is going to be crazy good. There’s still lots of story left to tell with Secret’s deal with the Fae, and the Tribunal Council’s reaction yet to be played out. I’m also kinda hoping that amidst all of this forthcoming madness McQueen will somehow find time to visit the werewolf shrink, because that would be a not-to-miss conversation! Just saying.

Sierra Dean knocked me on my ass again with COLD HARD SECRET. I can’t believe there’s only one book left! WANT.