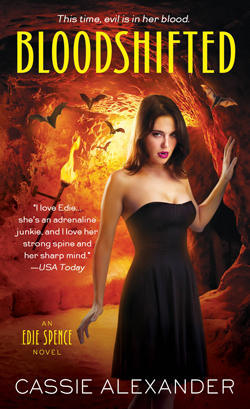 Ambushed. Blindfolded. Kidnapped by vampires. Edie Spence must race against time to save herself and her baby—from the nightmare that flows through her veins…

As a nurse in the hospital’s secret Y4 ward, Edie has seen her share of daytimers. Once-ordinary humans who’ve tasted vampire blood, daytimers are doomed to serve their nighttime masters. Forever. And now Edie has to face something even more horrifying: she’s become one too…

Abducted by the vampire, Raven, Edie is taken to the catacombs beneath the Catacombs, an ironically-named L.A. night club that supplies fresh blood and other favors for its vampire Masters. Edie has no intention of swapping her nurse’s uniform for a cocktail dress—not when her newborn infant needs her. But if she and Asher—her shapeshifter fiancé—can’t figure out a way to bleed Raven’s power, they may never get out of this plasma-soaked pleasure palace…undead or alive.

Had this been a regular installment in Cassie Alexander’s EDIE SPENCE series, I probably would have given it 5 stars because the story was well laid out, and the vamp-y action top notch. However, BLOODSHIFTED is also the last book, and as a result, I had to judge it as such. As far as conclusions go, it fell short in a number of pretty significant areas, namely the secondary characters (including the love interest) were for the most part MIA, and the ending was way too open-ended for a finale in my opinion. Those points aside, I really did enjoy this novel, its extra bloody and violent which is just the way I like ’em!

DEADSHIFTED ended on a rather brutal cliffhanger, and I’m pretty sure that I was the first in line to receive an advanced copy for review because I was quite gung-ho for book 5. Luckily, Alexander’s assistant is a doll and humoured me. Anyway, once received I dived right in and was thrilled to discover that the story picked up right where it left off. There’s a lot going on in this installment with multiple plot threads including freeing the mysterious vampire prisoner, putting an end to Natasha’s research, Raven using Edie to set a trap for Anna, and Jackson’s questionable loyalties. The Catacombs are no Y4, but I was happy to see Spence back in a medical-type setting, and loved the unexpected turn that the main story arc takes.

It took me five novels to be able to fully grasp Edie’s character because I struggled to understand her willingness to put others’ lives above her own. Having had little to no contact with nurses personally, it was difficult for me to comprehend her profession’s calling. But, it’s also one of the aspects that I enjoyed most about this series; Spence truly is in a league all of her own as far as heroines go. In this installment she struggles with her new daytimer side which helped to balance out her benevolent nature; it also allowed me to gain a newfound respect for her because it permitted her to make some difficult decisions when the situation called for it. My only complaint where Edie is concerned were her countless conversations with her View Spoiler »unborn child « Hide Spoiler throughout this book. They drove me absolutely b-a-n-a-n-a-s.

As previously mentioned, I did have a few issues with this novel on account of it being the finale, but before I get in to those I thought I should mention that Alexander’s publisher discontinued this series. I understand that the author had to finagle a last minute conclusion, and the challenges that that presented, however I believe that she could have handled it better. My main beef was with the secondary characters, or rather their absence; it was hard to say good bye to them when they were barely a blip on the radar. I was especially disappointed by the minute role that Asher played in this book considering that he’s the main love interest, and their HEA was lukewarm at best. I think this novel would have greatly benefited from an epilogue because although I understand the author’s desire to leave herself some room to maneuver should she decide to self-publish, the conclusion was far too open-ended to be able to satisfy this reader.

It’s with a heavy heart that I bid adieu to the EDIE SPENCE series. I can’t help but feel like the heroine’s adventures are far from over, but at least BLOODSHIFTED provided readers with some closure.