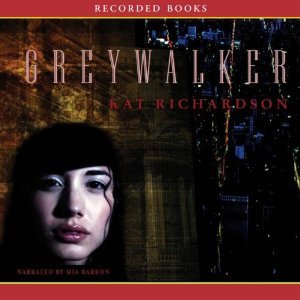 Harper Blaine was your average small-time P.I. until a two-bit perp's savage assault left her dead for two minutes. When she comes to in the hospital, she sees things that can only be described as weird-shapes emerging from a foggy grey mist, snarling teeth, creatures roaring.

But Harper's not crazy. Her "death" has made her a Greywalker- able to move between the human world and the mysterious cross-over zone where things that go bump in the night exist. And her new gift is about to drag her into that strange new realm-whether she likes it or not.

This is one of those series that’s been on my radar for a while now; it also came highly recommended from a number of reviewers who know how much I LOVE Urban Fantasy, so I decided to give it a listen in audio. The narration took some getting used to, as did Kat Richardson’s grungy poetic writing, but once the action started flowing I was quickly swept away by Harper Blaine’s story. GREYWALKER reminded me a lot of Kalayna Price’s ALEX CRAFT novels in that the main heroine is a PI with a penchant for seeing dead things.

I liked how the author introduced readers to her paranormal world by having the protagonist undergo a Greywalker 101 course if you will. Harper hooks up with Ben & Mara, two professors who dabble in the supernatural, and they use her as sort of a guinea pig to test their hypotheses while also helping Blaine to learn about her new gifts. It was entertaining observing the differences between theory and practice, and getting to examine some of this series’ supes from an academic perspective as well as from a witch-y one. In doing this, Richardson gave a nice overview of the main components in her GREYWALKER universe from multiple perspectives.

The writing style reminded me a bit of a spoken word artist on open mic night; as ugly as this book’s cover is, it does kind of have that gritty “feel” to it. That, and this quote from the blurb: “foggy grey mist, snarling teeth, creatures roaring”, describes the tone of this story fairly well. The plot moved along at a decent pace, and all of the 1990’s fads which were not meant to be funny, but were actually accurate at the time of publication, made me giggle. I mean, when’s the last time you saw a pager? I really enjoyed the secondary characters, especially Mara, her Irish wit was spot on. Ben, Quinton, Will, and Cam all contributed nicely to the narrative as well, and I look forward to encountering them again.

I wasn’t immediately wowed by Mia Barron’s narration, but like a pair of new shoes, starting an unfamiliar series is always an adjustment. Her tempo was a little slow for my tastes, and some of her character voices were kinda off. Cam for example, sounded like he was constipated which was rather comical, but made it difficult for me to take his dire situation seriously. Mara’s Irish accent on the other hand was very well done, and I expect that Barron’s narration will improve with each installment.

GREYWALKER wasn’t an insta-favourite, but book 1 rarely is, so I won’t hold that against Kat Richardson because I think that I probably would have enjoyed it slightly more had I read this one instead. Still, not a bad first kick at the can.

Thank you, Kimberly from the Caffeinated Book Reviewer, for recommending this series to me.