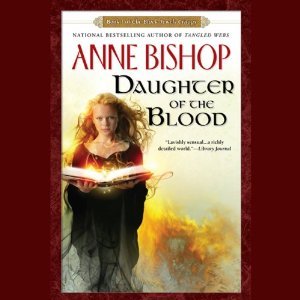 Seven hundred years ago, a Black Widow witch saw an ancient prophecy come to life in her web of dreams and visions. Now, the Dark Kingdom readies itself for the arrival of its queen, a witch who will wield more power than even the High Lord of Hell himself. But she is still young, still open to influence - and corruption.

Whoever controls the queen controls the darkness. Three men - sworn enemies - know this. And they know the power that hides behind the blue eyes of an innocent young girl. And so begins a ruthless game of politics and intrigue, magic and betrayal, in which the weapons are hate and love - and the prize could be terrible beyond imagining.

Ordinarily, this audiobook would never have landed on my to-be-read pile, but after listening to (and loving) Anne Bishop’s THE OTHER series, I found myself in desperate need of more. It’s been a long time since I’ve read a High Fantasy novel, so don’t let my less than stellar review discourage you because quite frankly I probably don’t know jack about this genre. The world-building and character development continue to be where this author’s strengths lie; although at times I did struggle because of the sheer magnitude of it all. There’s also an inherent creepiness factor that made the story difficult to appreciate because my growing sense of horror distracted me from the writing. DAUGHTER OF THE BLOOD wasn’t bad per say, but it was something alright. I’m just not sure what exactly.

Stepping into a new-to-me Bishop universe was exhilarating and I enjoyed learning about the inner workings of THE BLACK JEWELS. Women are clearly the more powerful sex in this world with men having the urge to serve actually bred into them, and then of course there’s the ring of obedience—which, for the record, is exactly what it sounds like. So, right now you’re probably thinking “sweet, girl power”, right? Yeah, not so much. The males are obviously super unhappy with their lot in life, so to get even they play sick games with little girls before they become witch. I spent most of this audiobook thinking “yes this is really creepy, but there’s no way the author’s going to go there, right?” And… then she does.

I liked Jaenelle well-enough, and quite frankly, I’m tempted to continue listening to this series just to see her enact revenge because those uncles sure do deserve a good ass whooping. I loved how “other” she was; it’s clear early on that she’s no ordinary witch child. It was interesting to see her interact with her unusual group of friends; one moment she’s having tea with Saetan and the next she’s chatting up Surreal, the prostitute assassin. Her innocence and ignorance about her true nature was endearing, and I thought it was curious how she ran before she crawled craft-wise.

I’m still not entirely sure whether John Sharian’s narration helped contribute to this audiobook’s overall ick factor or if I would have felt the same way had I read this title instead. There are more male POVs than female ones, so it makes sense to use a male narrator, but I can’t help but wonder whether a woman’s voice in my ear would have lessened the blow. Mind you, I don’t think there’s any way you could possibly sugarcoat the fact that a bunch of ancient men are obsessed with a little girl. That point aside, I enjoyed Sharian’s delivery and wouldn’t hesitate to listen to him again in the future.

The next installments in this series have huge potential, and I can definitely see myself enjoying this trilogy going forward, but first I had to survive DAUGHTER OF THE BLOOD. This book is not for the faint of heart.

79 responses to “Audiobook Review: Daughter of the Blood by Anne Bishop”