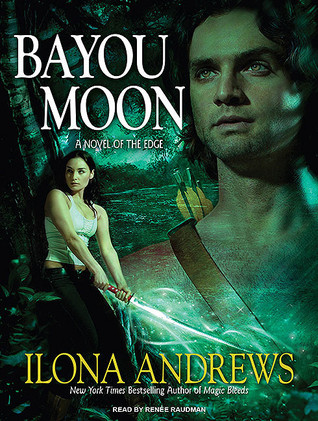 The Edge lies between worlds, on the border between the Broken, where people shop at Walmart and magic is a fairytale–and the Weird, where blueblood aristocrats rule, changelings roam, and the strength of your magic can change your destiny…

Cerise Mar and her unruly clan are cash poor but land rich, claiming a large swathe of the Mire, the Edge swamplands between the state of Louisiana and the Weird. When her parents vanish, her clan’s long-time rivals are suspect number one.

But all is not as it seems. Two nations of the Weird are waging a cold war fought by feint and espionage, and their conflict is about to spill over into the Edge—and Cerise’s life . William, a changeling soldier who left behind the politics of the Weird, has been forced back into service to track down a rival nation’s spymaster.

When William’s and Cerise’s missions lead them to cross paths, sparks fly—but they’ll have to work together if they want to succeed…and survive.


This book picks-up right where ON THE EDGE left off, except this time the focus shifts to William who just so happens to be a wolf changeling—my favourite kind! We also get to meet Cerise Mar, a heroine who’s on the same level as Kate Daniels from Ilona Andrews’ other series, and I immediately adored her. I enjoyed this installment slightly more than the first, and I think that’s because I was a little more familiar with THE EDGE universe this time around. I didn’t have to pay as much attention to the world-building, although the Mire is an extremely weird place with its own set of magical rules, so there were still tons of new tidbits to take in. BAYOU MOON is another unmissable listen by this fabulous writer / narrator duo!

I’ve loved pretty much every protagonist that Andrews has thrown my way, and Cerise was no different. She’s even more backwoods than Rose from book 1 which was great because I really enjoyed that aspect of the first installment. Mar lives in an enchanted swamp where cats are green, fish have legs, and mud burns; after growing up in that kind of environment you can’t help but be a little off. I liked how badass Cerise is! There’s this one scene where she and William are in a bit of a pickle, and she’s like don’t interfere, I’ll take all of these baddies on myself, and does. Mar is as far from damsel in distress as you can get, and makes the sexy changeling work for it. A LOT.

The Mire is an awesomely bizarre place, and I thoroughly enjoyed discovering all of its quirks. It was doubly entertaining navigating this odd swamp through William’s eyes because he’s constantly baffled by the absurdity of it all which leads to countless comical WTF moments. There’s this little side thread about an eel that pops up throughout the story that’s laugh-out-loud hilarious. I seriously loved it! The weirdness of the locale also comes through nicely in the main plot with the feuding families, Spider and his minions, and the magic behind Cerise’s uncle’s infamous “box”. Rose, Declen, and the kids make cameo appearances in this novel, and there are several references to them throughout this tale which I appreciated, because I wasn’t quite ready to say good-bye to these amazing characters after only one installment.

I can always count on Renée Raudman to deliver a top notch audiobook with her superb narration skills, and knack for upping the ante on an already action packed tale. Originally, I used to think of her as “Kate Daniels”, but after listening to her for this series as well, for me she’s now become synonymous with Ilona Andrews’ writing. Her transitions between POVs and chapters are smooth, and she always seems to perfectly capture the emotions of any given scene. Raudman is definitely one of my auto-buy narrators.

BAYOU MOON is another epic listen by this fantastic duo (trio?), and I can’t wait to start FATE’S EDGE!