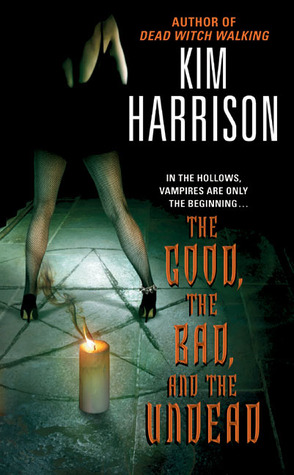 Rachel Morgan, sexy witch, independent bounty hunter, prowls the downtown Cincinnati for criminal creatures of the night. She can handle leather-clad vamps and a cunning demon or two. But a serial killer who feeds on the experts in the most dangerous kind of black magic is an ancient, implacable evil that threatens her very soul.

If I still had any doubts about The Hollows when I finished the Dead Witch Walking, The Good, the Bad, and the Undead laid them to rest.

Book 2 begins with Rachel and Jenks in the middle of a run. Several months has passed since the first book ended, and without a death threat hanging over her head, Rachel is free to pursue her new career as an independent runner. Nick is now officially Rachel’s boyfriend, and the roommate situation with Ivy seems to have calmed down now that Rachel knows what Ivy’s triggers are and not to pull them.

And things just keep swimming merrily along. (<—–did you see what I did there? *snickers*)

Even if (for some strange reason) you were hoping things would calm down for our new favorite witch, when Glenn shows up as Rachel and Jenks’ ride after the run (instead of Ivy), and insists on taking a detour to the FIB (Federal Inderland Bureau—the human version of police enforcement), it seems HIGHLY unlikely.

Even MORE unlikely when you learn the reason for the detour is that Sarah Jane (Trent’s new secretary) is there being questioned after reporting her missing boyfriend.

A serial killer is on the loose in Cincinnati, you see. And serial killers have VERY particular tastes. This one has been viciously murdering ley line witches . . . and guess what Sarah Jane’s boyfriend happens to be . . .

SO many things happen in this book.

Rachel shows an uncommon aptitude for ley line witchcraft. This is distressing for her, b/c as she has stated (on numerous occasions) she is strictly an earth witch. Ley line magic isn’t as black and white as earth magic, and Rachel has seen too many friends slide down that slippery slope from white, to gray, to black b/c POWER lurks in ley line magic. POWER that tempts and overwhelms, and Rachel wants no part of it.

We find out what Trent is. Not telling. READ IT. *poke*

Rachel discovers links between her father and the Kalamacks. Not telling that either. *pokes again*

And not lastly (not by a long shot, but if I were to list all of the Big Deal things that happened in this book, we’d be here all day, AND I’d probably get smacked from all the poking), Rachel makes a deal with a demon that sets up for book 3 rather nicely. And by “nicely” I mean “holycraphowisshegoingtogetoutofthatone?!”

In addition to SO many things happening in this book, SO many characters are further developed and/or introduced.

We meet Rachel’s wacky mother (who accidentally alludes to a HUGE secret that gets revealed later on), and Piscary (hey, I just noticed “scary” is in his name . . . wonder if that was on purpose . . . hmmm . . . ), the scary master vamp. We also meet the several times mentioned, but never actually seen Quen (one of my favorite secondaries). Trent is shown in a less diabolical light that makes him a much more complicated individual, and Nick . . . well, Nick’s moral code is revealed to be even more nebulous than previously suspected, but due to certain other events, I can’t help but feel a bit sorry for him. That whole situation is just a MESS.

And again MORE. Too much to cover all of it, but believe me when I say that it was very well done.

There wasn’t much on the world-building front, but then it wasn’t really necessary. Pretty  much everything you need to know was covered in the first book. I still find it slightly ridiculous every time Rachel goes out of her way to hide evidence of tomato consumption from the humans, but what are you going to do?

Tomato ridiculousness aside, The Good, the Bad, and the Undead brilliantly avoided the book 2 slump that so many series fall prey to. It was another artful combination of humor, action, danger, and flirtation, and BONUS all of this took place within a well-developed and identifiable plot! I know! It so rarely happens that I don’t know what to do either!

That’s not true, I know exactly what to do—read the next book. *wink*

76 responses to “Review: The Good, the Bad, and the Undead by Kim Harrison”