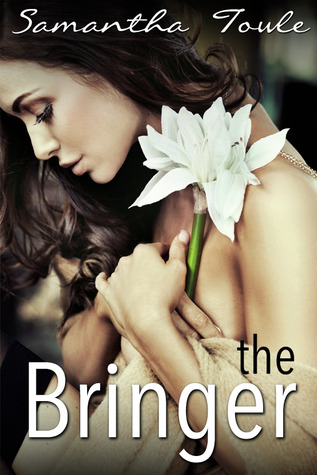 Lucyna is a Bringer. An emotionless being, whose role is to guide souls to the gate of Heaven.

Until she meets James.

In that moment, everything she knows changes, when she is struck with the sensation of feelings.

Curious and unable to help herself, Lucyna finds her herself drawn to James, against every instinct she has ever had, against every law of the universe.

Before she knows it, she’s fallen in love.

And for a Bringer, that's a terrifying fall.

Those of you that have read any of my reviews probably can tell that I have very eclectic tastes in reading. I love the different because same thing different day, just doesn’t work for me. There’s some genres that are just not my thing-fairy tales, Harry Potter and some kinds of fantasy just doesn’t do it for me. If Samantha Towle had not written this book, I might not have looked at it twice-well accept for the cover, which is pretty great. But Ms. Towle did write this book and since she is one of my favorite authors, I decided it was past time for me to read it. And it is really different.

Lucyna is a Bringer and is tasked with shepherding the dead to heaven. She has no feelings and doesn’t even know what she looks like. So when it’s time for her to take an older man to heaven and sees his son, James, her feelings wake up. The fact that only the dead can see her, means she can do nothing about her feelings for James. She’s in a quandary because the Elders of the Bringers can never find out what she is doing. And what she is doing is spending every minute with James when she isn’t working. Of course James can never see her, or maybe he can. Something happens and he does see her and she does look human to him. Lucyna knows her time is short on earth because any minute, the Elders could swoop in and take her back. This is the story of what happens while Lucyna is on earth with James.

I loved the romance in this story and of course really enjoyed Lucyna’s character as she tries to acclimate herself to the human world. Even though she has to visit earth for her work, she is pretty clueless about so many things. James was sweet, handsome, and an all round good guy. He’s grieving for his father, and is about to give up on his life when he meets Lucyna. Of course with all good books, there are a couple of villains and I do love to hate on villains. Oh and I haven’t even mentioned the Angels.

The story starts a bit slow and I think that’s because in the beginning, Lucyna has no feelings which makes her a bit robotic at times. The story picks up considerably after Lucyna actually is seen by James and I found it to be intriguing to the point that I read it to the end-really quickly.

The Bringer takes place in England so there are some British spellings of words at times and there’s the use of some words that are kind of ancient at times, but that’s because Lucyna is actually pretty ancient,so that worked for me. There is also some typos, but then most books have them. This is the first book written by Ms. Towle. If you haven’t read any of her books, I can recommend them all. She is now a best selling author and has written paranormal romances, rock star romances, and a contemporary romance. And yes I have read and loved all of them!

29 responses to “Review: The Bringer by Samantha Towle”