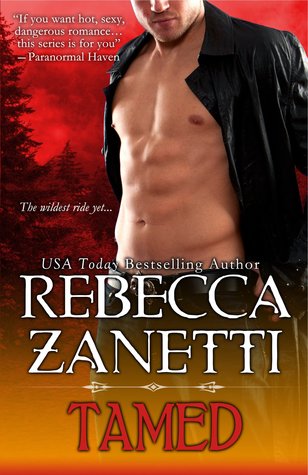 Caleb Donovan was never meant to be a prophet. At heart he’s a conqueror, his appetites far more carnal than spiritual. He’s not inclined to repress his passions and surrender to fate. After all, that’s what cost him Lily—three centuries ago. She married another, because it was ordained. Now that he’s in the same benighted calling—and forced into proximity with her—all the old desires are roaring back to life…

After widowhood and centuries of celibacy, Lily is eager to explore the wild side of life, except now she’s vulnerable to another forced relationship, with an enemy. But this time she’s determined to choose her own path. And if hot, furious Caleb comes charging to the rescue, it might just change both their destinies…

And now we get Lily’s story. I was thinking that a full book would be better to tell her story, but this novella worked out well in the telling. This one doesn’t feature one of the Kayrs family, but close enough. As a prophet for the supernatural realm, Lily has lived for three centuries without love. Her husband, also a prophet, died shortly after her marriage. Centuries before, Lily was made to marry by her parents, but not for love. She was already seeing Caleb, but it wasn’t to be. Caleb, previously a vampire warrior, is now a reluctant prophet. Since the vampire world is readying for peace talks with the diabolically evil, underground creatures, the Kurjans, and the cruel demons, all three of the prophets have come together near the vampire’s mountain homes. And since this is a novella, that’s all I am telling about the actual plot.

The world building by Ms. Zanetti, is pretty genius. Her vampires, the Karys brothers, as well as Caleb, are really pretty similar to humans, in their need for relationships, and although warriors through and through, they are all pretty nice guys. In the first books, they lived in underground, mountain homes that were very intricately carved out. Now they still live in the mountains, but now are in a gated community. This novella has the vampire king, Dage, and his niece, Janie, along for the ride. Demons are still wanting to kill Janie, and the Kurjans, just want her to mate with them. Janie is still fated to change the supernatural world in her twenty fifth year, which is now. And now one of the Kurjan leaders, Franco, wants Lily as his own. Sorry that was a plot point but it needed to be said.

I enjoyed the characters of Caleb and Lily. And of course really liked their romance. There was some things that I didn’t enjoy however. I am used to the action packed previous books. There is a bit of that, but not a lot. We get a bit of the romance, but not a lot. A big part of the story centered around readying the peace talks quarters, and I found that boring. If that had been part of a book, it would have been okay, but in a novella, it just wasn’t what I wanted to read about. I found myself putting the book down a lot, and even read another full book, while in the middle of it.

I am sure this book will be widely read, and actually it should be. It is the bridge to the next book which I believe is Janie and Zane’s story-finally. Seems like it’s been forever getting to this point. So if you are anxiously waiting for that book, this could just the thing to tide you over until then.