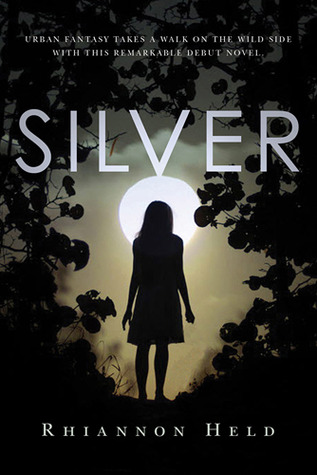 Andrew Dare is a werewolf. He’s the enforcer for the Roanoke pack, and responsible for capturing or killing any Were intruders in Roanoke’s territory. But the lone Were he’s tracking doesn’t smell or act like anyone he’s ever encountered. And when he catches her, it doesn’t get any better. She’s beautiful, she’s crazy, and someone has tortured her by injecting silver into her veins. She says her name is Silver, and that she’s lost her wild self and can’t shift any more.

The packs in North America have a live-and-let-live attitude, and try not to overlap with each other. But Silver represents a terrible threat to every Were on the continent.

Andrew and Silver will join forces to track down this menace while discovering their own power and their passion for each other.

I’m always on the look-out for new spins on werewolves so I decided to give Rhiannon Held’s a try by reading her debut novel, SILVER. My feelings on this book are pretty much split right down the middle; I loved the heroine and her mad ravings, and the mythology drew me in, but the story lacked in intensity and the romance just didn’t jive. I enjoyed the author’s lyrical writing style, and there are definitely more than a few howl worthy quotes however, the ending failed to deliver on what the build-up promised, and as a result, I was left feeling somewhat meh about the whole reading experience.

I liked the simplicity of Held’s world-building; she conveys enough details to keep things interesting without falling victim to the “book 1 information dump syndrome”. I enjoyed learning about pack hierarchy, the lore surrounding Death, the Lady, Weres and humans, and the religious aspects of the story. The author’s take on the werewolves’ wild vs. tame selves felt like a page out of a Psychology textbook, and demonstrated a good grasp of the genre. Death’s character was also an unexpected surprise; originally I thought he was just going to be part of Silver’s delusion, but he actually takes on a life of his own and left me wondering about his true nature.

Piecing together what happened to Silver through a series of clues and delirious babbling was part of this book’s charm. Held’s way with words turned the girl’s crazed gibberish into poetic prophecies. I was easily mesmerized by the author’s imagery, and at times I felt like I was sitting down to tea with the Mad Hatter. Both of the main characters are incredibly strong in their own right, but they are also irrevocably damaged. Dare is Roanoke’s pack enforcer, the butcher of Barcelona, and one of the more dominant wolves in North America, but all he really wants is to belong. Silver is certifiably nuts and yet, only the most tenacious could have survived her ordeal.

The story started off strong, but was unfortunately unable to hold its momentum the whole way through. The plot felt like it was barreling towards one pivotal moment only to fizzle where it counted. Dare leaves his pack, flies half-way across the country to avenge a girl he barely knows, challenges another alpha for leadership so that he can set his brilliant plan into motion, and then… nothing. I couldn’t help but feel cheated by the ending. There wasn’t much of a segue to the next installment either, no hook to entice me into reading TARNISHED. I wish the secondary characters had been a little more fleshed-out as well. I loved Andrew and Silver, but the rest just blended into the background.

SILVER is a character driven novel, and Rhiannon Held is undoubtedly a talented writer, but the story failed to live-up to its synopsis by omitting two key Urban Fantasy elements: action and romance. I don’t think I’ll be continuing with this trilogy.