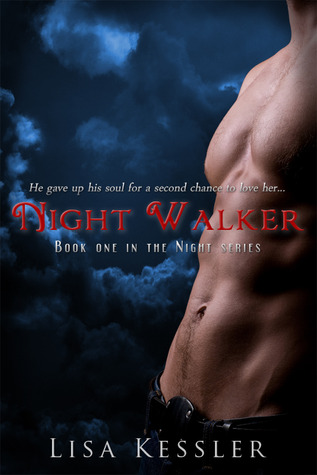 He gave up his soul for a second chance to love her...

Two and a half centuries ago, Calisto Terana lost everything when a zealous priest murdered the woman he loved. Now, desperate for another chance to love her, he wants redemption for the mistake that cost her life.

She's haunted by dreams of her own death...

After catching her fiance with another woman, Kate Bradley returns to San Diego to clear her head. The last thing she needs is romance, but after meeting Calisto she's drawn to him in ways she doesn't understand.

They've waited in the shadows for centuries...

Calisto has no doubt Kate is the reincarnation of his lost love, but the Fraternidad Del Fuego Santo has a new watcher with dark ambitions of his own. As old enemies reemerge and a new threat arises, the betrayal that enslaved Calisto to the night might destroy the only woman he's ever loved again.

I spend time on one of the paranormal book club sites on facebook, and Lisa Kessler’s name almost always comes up when it comes to recommendations. I had heard of her before of course, but this is the first book by her that I have read. And I think I picked a good one to start with!

Kate is a young school teacher from Reno that visits her friends in San Diego. She’s running from a broken engagement and since she grew up there, it’s the perfect place to lick her wounds. While doing the tourist thing with her friends, she visits an old Spanish mission. She meets Calisto, a handsome, old fashioned, Spanish gentlemen, that she immediately feels drawn to. What she doesn’t know is that her destiny and his are intertwined, and in fact, she is the reincarnation of his only love that died a couple of centuries before. Calisto is a former monk that committed the sin of falling in love. Through a series of events, he loses his love before they can have a life together. He chooses to become a Night Walker(vampire) so he can love her again someday, and this is the story of what happens when they meet again.

The story goes back and forth in time a bit, just enough for us to get the back story. I found both parts of the story to be well written, and in fact, I found Ms. Kessler’s style/tone of writing was a bit different. At first I wasn’t sure about it, but I found that I did enjoy it. I don’t know how to describe it other then, there’s a seriousness to the tone. No lighthearted read here, this is a true romantic drama. I hope that makes sense; if you read this, perhaps you will understand what I am trying to explain. I should mention that this is her first book, and I think she does an excellent job for a first book!

I enjoyed the world building involved. We get the story about how Calisto becomes a Night Walker, and also the story of the group of monks that are trying to kill him. So yes, this book also involves killer monks with both Calisto and Kate as their targets. And while I am talking about Calisto and Kate, I should say how much I enjoyed their characters. I thought they were fully realized and were interesting characters. Calisto, in particular, was well imagined in that he really did seem like someone that had lived centuries before.

This is a series, but I think this could stand alone because another couple are the main characters of the next book, and I am not sure if it intersects with this book at all. If it wasn’t for the very last part of the book, you would never know it was a series. I don’t feel the need to immediately read the next book, but I do want to read it, and have already bought it. I do love a different spin on a vampire book-although Calisto doesn’t consider himself a vampire, because as he says it, he is a Night Walker.