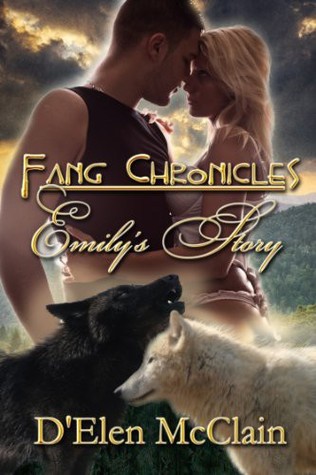 After a werewolf savagely rapes Carolynn, she hides her tormented secret below the basement stairs for nineteen years.

Emily’s entire universe was the caged room in the cellar. She knew little kindness and received only enough food to stay alive. She understood nothing of the world above stairs. She would have died in the room of her childhood, but her world changed the day she could take no more. Her life began the day she killed her mother.

Brandt the alpha of the Northern Pack has loved the same woman for hundreds of years. Each day his heart breaks slowly because she does not return his love. Having no will to live, he invites death through challenges for alpha.

Brandt’s life changes when he hunts a feral werewolf for killing a human. Delivering death to the beautiful white she-wolf is his job but one bite of her sweet blood alters his heart and now he must tame the woman who has never known love.

If you like books about vampires and werewolves, this could be a good fit for your next read or your tbr pile. I read the first in the series, Amy’s story, really enjoyed it, and literally just finished this one. I do think this one is even better then the first, although that could be because it’s so fresh in my mind.

Emily is a feral wolf. As a product of a rape of a human, Emily is caged her entire life and told that she is a demon. She is starved and has never known love or kindness. When Emily kills her human keeper(I hesitate to call her by her real title of Emily’s mother) the attack comes to the attention of the closest werewolf pack. The alpha, Brandt, and several of his pack track Emily down in order to kill her. As soon as Brandt tastes Emily’s blood, that wasn’t going to happen. Not only is Emily his mate, she is also an alpha wolf.

This story drew me in and kept me reading until I finished, well as much as real life would let me. Don’t you hate it when real life interferes with reading? I am the first person to admit to not reading that many werewolf books until the last year or two, so the world building in this book was really new to me. I thought it was really creative and intricately plotted when it came to pack life, rules, and a myriad of small and large details. The biggest difference for me was vampires being the master of werewolves. Or I should say one vampire. The vampire is the leader, because he or she is the one who gives immortal life to the pack. An enzyme in the saliva of the vampire not only bestows long life, it also heals. It’s a win/win for the vampire who has as much blood as they want, and for the pack who stays healthy and alive.

This book is not only about Emily’s integration into pack life, and into being the Alpha’s mate, but also continues with the fight with the werecats that started in the first book. This book doesn’t take place in the same pack as Amy’s story started in, but does intertwine with that pack in one large part of the book. I do love catching up with characters from previous books.

This book has lots of steamy sex scenes and is a very adult read. I enjoyed the characters, and the premise of a feral werewolf was very interesting to me. When I read Amy’s story several months back, I didn’t feel the need to immediately buy the next book, although I knew I wanted to eventually read it. After reading this one, I will definitely be buying the next one very soon. There wasn’t really a cliffhanger, but I do want to see what happens with the ongoing struggle with the werecats and some other aspects of the story also. Oh and fyi, Amy’s story is free on Amazon.