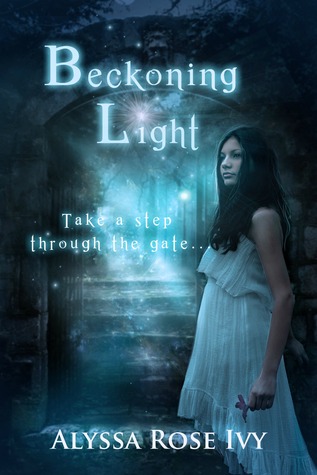 As Charlotte steps through the gate, she has a strong feeling that nothing will ever be the same again.

Moving back to South Carolina after three years away, Charlotte knows she's going to have to face people from her past and adjust to a new high school, but she's completely unprepared for what else waits for her in Charleston.

Drawn through an old garden gate, Charlotte discovers a hidden world where she meets Calvin, a boy to whom she is inexplicably attracted. As Charlotte is pulled deeper into this hidden world, it's up to her older brother Kevin to rescue her. No matter how hard Kevin tries, the rescue depends upon Charlotte fighting her intense feelings for Calvin while mastering a set of abilities that she has only just discovered she possesses.

I really, REALLY loved this book. I’ve read another series by Alyssa Rose Ivy, The Crescent Chronicles, that I really loved so I was really looking forward to reading this series.

Charlotte just moved back to Charleston, South Carolina with her brother Kevin to live with their uncle Monty. They had been gone for three years living with their dad in Alaska. Both Kevin and Charlotte were very happy to be back home. The house they live in with their uncle has always had this gate behind it and they were always told to never go near it or try to open it. They always assumed that it just didn’t open or lead to anywhere. Charlotte finds an old box that has a necklace in it that was her mothers and it unlocks the gate. For some reason she feels a pull to open it and to just see whats behind it. She had no idea how much her life was going to change after that!

When Charlotte opens the gate she sees that it leads to another world and she finds out that this world is called Energo. When she steps through the gate she meets a young man named Calvin and they instantly have a connection with each other. And the reason for that is because Charlotte is their next Essence and he is meant to be the Gerard. The purpose of the Essence is that she is connected to the earth, so she helps the lands grow and the farmers crops to stay healthy. Without an Essence, they go into a depression like state and all the crops die and its hard to feed everyone. The Essence also has Guardians and it turns out that her brother Kevin is one of them. Her mother was the Essence before her, but she fled when the wrong people tried to talk her into doing things she didn’t like. Now that Charlotte has crossed into Energo, someone who she thought was a friend, takes her to Bellgard, which is where the Essence is kept with her Guardians. Monty, Kevin, and his friend Liam go after her after they find out she’s been taken.

This book was definitely one that was hard to put down. It was an easy read and flowed well. I love Alyssa’s writing style and I’ve already bought the last two books in the trilogy, plus three more of her books of another series. She really knows how to keep things simple and not confusing, but also addicting and captivating. I think if you haven’t read one of her books, you definitely should! She writes Young Adult and New Adult, so whatever you prefer, you need to start reading her books now!