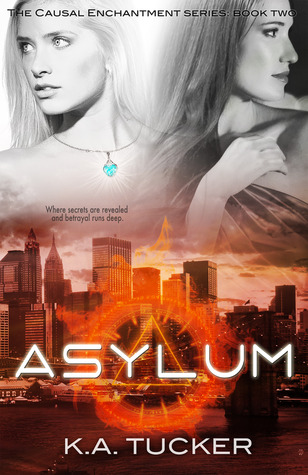 Tucked away in Sofie’s wintery asylum with no hope of release for years, Evangeline must come to terms with her situation: the curse still plagues her, she’s now hunted by a two thousand-year-old vampire, and the guy she’s in love with tried to kill her. Plus, she’s locked up with a cranky Max and the Forero kids—two people everyone seems to prefer dead over alive. Things aren’t looking good.

Meanwhile, back in Manhattan, Sofie struggles to keep forty trapped and bloodthirsty Ratheus vampires at bay and a desperate Viggo from killing Evangeline’s friends, all while hints stir outside the walls of the NYC vampire asylum of a war brewing between the Sentinel and the witches.

Is there any hope for Evangeline and Caden? Can Sofie control the rival powers? Is the fate of Earth predestined?

In the last two days, I re-read the first in this series, Anathema, and enjoyed it all over again. Then I read this one and also enjoyed it. Anyone that has read the Ten Tiny Breaths series by this author, already knows what a good author K.A.Tucker is, so it was a no-brainer that I was going to read this series. She is becoming one of my go to authors for sure.

Evangeline is an eighteen year old orphan who got involved with Sophie in the last book. Sophie is a witch turned vampire, that pretty much tricked Evangeline into going to New York with her for a job that didn’t exist. She found herself living with three vampires and were-beasts in the shape of huge dogs. One of them, Max becomes her protector and a good friend with a funny personality at times. And oh yeah, he talks in Evangeline’s mind. He ended up being one of my favorite characters. From the beginning, she goes to another world in her dreams, a world where the only inhabitants are vampires, but one that closely mirrors our world. The human population has been completely wiped out by vampires. She meets and befriends a small group of vampires and one of them, Caden, ends up being the one she falls in love with. A magical necklace that Sophia put around her neck keeps her safe from vampires.

This time around, Evangeline has managed to bring back her group of friends, not knowing that about forty others have come along for the ride. Not good news, since they haven’t tasted human blood in seven hundred years. Sophia has locked them all in the mansion that she and the two old (and horrible)vampires live in. Big problem? If they feed off each other, they morph into something that CAN and WILL escape. And what they morph into is not pretty. Sophia sends Evangeline magically away from the melee that’s happening at her home. She ends up in a cabin in the middle of a Siberian winter along with most of the humans(staff and visitors) from the New York home. Think things can’t happen in the middle of nowhere? Think again!

The story is told from two points of view this time. We get both Evangeline’s and Sophie’s POV’s. I wasn’t sure if I was going to like hearing from Sophie’s POV, but it really worked and we really understand a lot more about Sophie and her motivations.

It might seem that I have told a lot about the story, but not so much about the second book actually. There’s so much going on in this book. We have evil witches, not so evil witches, evil vampires, and not so evil vampires involved. There’s even a secret society who’s sole purpose is to eradicate vampires. K.T. Tucker writes a tight story, that is very well written with good characters. I would say that this is for older young adults and adults, due to the amount of violence. I really liked it and will be reading the next one as soon as my tbr pile will allow me to.

10 responses to “Review: Asylum by K.A.Tucker”