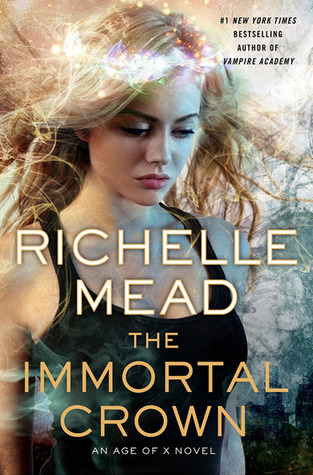 Gameboard of the Gods introduced religious investigator Justin March and Mae Koskinen, the beautiful supersoldier assigned to protect him. Together they have been charged with investigating reports of the supernatural and the return of the gods, both inside the Republic of United North America and out. With this highly classified knowledge comes a shocking revelation: Not only are the gods vying for human control, but the elect—special humans marked by the divine—are turning against one another in bloody fashion.

Their mission takes a new twist when they are assigned to a diplomatic delegation headed by Lucian Darling, Justin’s old friend and rival, going into Arcadia, the RUNA’s dangerous neighboring country. Here, in a society where women are commodities and religion is intertwined with government, Justin discovers powerful forces at work, even as he struggles to come to terms with his own reluctantly acquired deity.

Meanwhile, Mae—grudgingly posing as Justin’s concubine—has a secret mission of her own: finding the illegitimate niece her family smuggled away years ago. But with Justin and Mae resisting the resurgence of the gods in Arcadia, a reporter’s connection with someone close to Justin back home threatens to expose their mission—and with it the divine forces the government is determined to keep secret.

After reading the first two books in this series back-to-back, I was reminded of something that often happens while I’m reading a book by Richelle Mead. I’ve already admitted to loving her, and I do, but oftentimes something, normally just a single thing, keeps me from love, LOVE, L-O-V-I-N-G whatever it is that I’m reading.

In Vampire Academy, the books were YA Urban Fantasy, and that brought inevitably adolescent issues. In Georgina Kincaid, it was the whole, “I’m a succubus, and I can’t EVER turn it off,” thing, in Dark Swan it was Eugenie’s last Big Decision that made me see nothing but tears and recriminations in her and Dorian’s future when what she did inevitably came to light, and in Age of X . . . well, in Age of X, I can’t quite put my finger on the problem. Maybe it was the drastic turn the religious observations took from general to specific. Maybe it was the dissatisfaction I felt at the state of Mae and Justin’s relationship when the book ended.

And it’s weird, b/c I REALLY liked this book. A lot. Like couldn’t put it down.

The Immortal Crown opens with Mae and Justin checking out an alleged Voodoo priestess in the Bahamas. The priestess is in fact the real deal, recognizes Mae as a fellow Elect, and spouts nebulous and vaguely threatening warnings about a War of the Elect. Mae and Justin head back to their hotel room where they’re attacked by BUGS. Not just any bugs either—SCARAB BEETLES.

They return to where the priestess is holed-up, thinking her responsible for the attack, only to discover that she is moments from death, having suffered an attack herself. She spouts more warnings about Elect attacking Elect and future wars among the gods, and then dies.

Mae and Justin return to RUNA only to almost immediately depart again for Arcardia, having been maneuvered into the trip by the politicking Lucien, who’s convinced that a successful peacemongering trip there will seal his election win.

And once again, EVERYTHING is connected.

This is where Mead excels. She flawlessly weaves together a story in which seemingly isolated incidents, casual interactions, and what appear to be coincidences are anything but. And again, she’s subtle. So the most you can come up with on your own, is that something is not right, there’s more to that person then what appears on the surface . . .

But you have no clue what’s actually coming.

I love that, incidentally.

As far as the world-building goes, the most development takes place in Arcardia. We learned in Gameboard of the Gods that Arcardia is RUNA’s neighbor with whom they hold a merely tentative peace. There are constant border skirmishes, and the threat of war looms heavily in the background.

And this is where I begin to have problems.

Mead states very clearly in the early part of the book, that present-Arcadia bares no similarities with past-southeastern US. That Arcardia is purely the result of a land area turning to religion rather than science in the aftermath of the disease that killed-off half the world’s population, but this simply isn’t true. Arcadia is a horrifically exaggerated version of the pre-Civil War south with some puritanical principles tossed in for fun. And just so there’s no confusion:

And of course with Mead there’s no smooth path to romantic euphoria. NOPE. We need to appreciate what we’re given, and by golly, nothing that comes easily is worth having.

I’m just hoping Mae and Justin work out their stupidity BEFORE the last book in the series.

Please, Richelle Mead? Please, PLEASE, can we have a happy couple before the very end? You can even throw all kinds of crap in their happy, little path. As long as it, for the love of the gods, gets RESOLVED, I don’t care. Just let them be TOGETHER.

The Immortal Crown is this year’s follow-up to the brilliant debut Gameboard of the Gods in Richelle Mead’s Age of X series. There was more of everything—more gods trying to gain a toe-hold, more places to explore, more secondary characters to love, more sinister villains, more kick-assery from Mae, more brilliant manipulations from Justin, just MORE.

And I don’t see it winding-down anytime soon.

I still highly recommend this series to anyone interested in mythology-based and futuristic Urban Fantasy. This is one of the good ones. And with so many UF series wrapping-up recently, or in the near future, we all need to be aware of the good ones!

88 responses to “Review: The Immortal Crown by Richelle Mead”