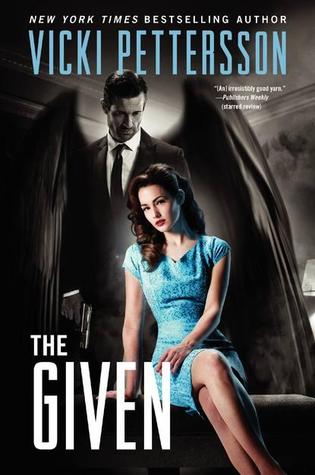 After learning his wife survived the attack that killed him fifty years earlier, angel/PI Griffin Shaw is determined to find Evelyn Shaw, no matter the cost. Yet his obsession comes at a price. Grif has had to give up his burgeoning love for reporter Katherine “Kit” Craig, the woman who made life worth living again, and dedicate himself to finding one he no longer knows.

Yet when Grif is attacked again, it becomes clear that there are forces in both the mortal and heavenly realm who’d rather see him dead than unearth the well-buried secrets of his past. If he’s to survive his second go-round on the Surface, Grif will have to convince Kit to reunite with him professionally, and help uncover decades of police corruption, risking both their lives . . . and testing the limits to what one angel is really willing to give for love.

This series is a great way to switch things up if you’re looking for something that’s a little outside the paranorm, and it’s also a trilogy which makes it not too daunting of a commitment. The supernatural elements are subtle, the mystery is complex and engrossing, and the ending is unexpectedly uplifting. I missed the rockabilly aspects that were at the forefront of book 1, and the story lagged a bit in the earlier chapters, but overall this was by far my favourite installment out of the three. Once the revelations start pouring in—there’s no lack of excitement which helped catapult this novel into five star territory.

I enjoyed the Vegas old school mob plot line that’s at the center of THE GIVEN. This component has been present to a lesser degree throughout this series, but really gets amped-up in this final book. Sin City has changed dramatically in the last fifty years, so it was interesting to see that in spite of the odds, some things have stayed the same. Old habits die hard, and even though the villains are rather elderly, that doesn’t make them any less capable or vicious. If anything, the fact that this vendetta has endured for five decades made the truth cut extra deep.

Grif and Kit’s relationship, both professional and personal, really came together in this installment. When I first started reading this series I wasn’t sure how the romance was going to play out, but I have to say that I was pleasantly surprised by its conclusion. At times it seemed like Heaven was conspiring against them, and I couldn’t help but wonder who’s side the Pures were really on. Their motivations still aren’t entirely clear which I suppose was the point because God tends to work in mysterious ways, but at the end of the day this only served to reinforce the fact that true love conquers all.

The noir twister is well-written, difficult to predict, and thrilling to unravel. I loved the way that the story arc came full circle, literally. I’m all for tying up loose ends, but Pettersson takes that to a whole new level with this novel. Grif’s life actually finished and began anew in the exact same spot which was pure genius! But, I wasn’t overly shocked when the author revealed Evie’s true identity which was mildly disappointing. I did however enjoy the surprise HEA because I honestly expected this trilogy to close on a sad note given its dark tone.

THE GIVEN is a stunning conclusion to an unusual trilogy that’ll leave you wishing that it hadn’t ended so soon.

54 responses to “Review: The Given by Vicki Pettersson”