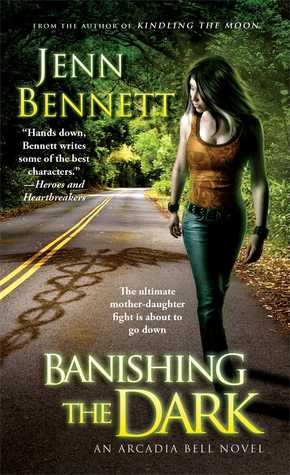 In this new installment in a beloved urban fantasy series, gutsy renegade mage and tiki bar owner Arcadia Bell faces the last danger standing between her old identity and a new future she desperately wants: herself.

After surviving a supernatural battle with Hellfire Club leader Ambrose Dare, Cady and her demon boyfriend, Lon Butler, journey across California to find the source of her mysterious Moonchild origins. But the further they travel, the stranger the revelations about her parents’ past occult lives. Can Cady keep what’s rightfully hers, or will she have make the ultimate sacrifice to stop her murderous mother from crossing the planes?

2014 seems to be the year of series finales, and out of all of them, ARCADIA BELL has been the one that I’ve been dreading the most. Jenn Bennett is one of my top five go-to Urban Fantasy authors, and having to say goodbye to these beloved characters after only four books (and a novella) is heartbreaking. That point aside, BANISHING THE DARK is pure magic with its topsy-turvy plot, explosive chemistry and exceptional epilogue. And, the first ever chapters from Jupe’s POV are just… wow. I tried to savour this one—really, I did—but I was a goner after page one.

The showdown between Cady and her mother has been brewing since KINDLING THE MOON, and has finally reached its boiling point, but that’s not the only challenge Team Bell will have to face before they earn their HEA. Lon and Cady’s relationship gets put to the test in the most unlikely of ways which added an entertaining twist to their interactions throughout this book. I loved that the author made this installment all about “them”; although, I did find myself missing some of the secondary characters at times. The sexual tension actually surpassed the non-stop action in a few instances which helped ensure that this conclusion was pleasing on all fronts.

I adored Jupe’s role in this novel, and the couple of scenes from his POV made me desperately crave a novella from his viewpoint. I liked that he had just as big of a role to play in the Moonchild spell investigation as Cady and Lon did. His conversations with Priya were downright hilarious, and I loved that we got to witness his “first love”. His inclusion in the epilogue was a nice little bonus too. I never thought I’d count a teenage kid among my favourite characters, but Jupiter Butler is one of a kind!

No ARCADIA BELL book would be complete without an edge-of-your-seat story line, and the Moonchild investigation succeeds in delivering that and so much more. The curve balls will have you white knuckling your eReader, while the revelations will leave you scrapping your jaw up off the floor. It’s been a real challenge to write this review without spoilers because there are just so many things to squee about; needless to say, this installment certainly does not lack in the “oh shit” department.

Jenn Bennett certainly knows how to make an exit because BANISHING THE DARK ends on the highest of highs. Encore!!!

42 responses to “Review: Banishing the Dark by Jenn Bennett”