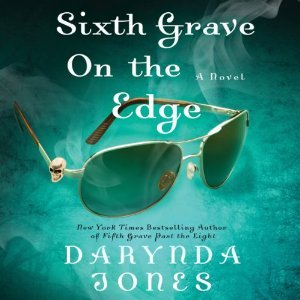 Most girls might think twice before getting engaged to someone like Reyes Farrow - but Charley Davidson is not most girls. She's a paranormal private eye and grim-reaper-in-training who's known to be a bit of a hell-raiser, especially after a few shots of caffeine. Her beloved Reyes may be the only begotten son of evil, but he's dark and sultry and deeply sexy and everything Charley could hope for. Really. But when the FBI file on Reyes' childhood happens to land into her lap, she can't help herself: She opens it...and then the real fun begins. First, Charley finds a naked corpse riding shotgun in her car. Then, a man loses his soul in a card game. Throw in a deaf boy who sees dead people, a woman running from mobsters, and a very suspicious Reyes, and things can't get any worse for Charley. Unless, of course, the 12 Beasts of Hell are unleashed....

I held off on the fifth book for the sole purpose of evading the cliffhanger, yet here I am experiencing exactly what I wanted to avoid—a horrible hangover that’s going to last five months. Ok, so I know it’s bad form to start a review off by talking about the ending, but holy geez how can I not? I mean… the series just completely changed directions because of one revelation! I always feel like Darynda Jones leaves readers with more questions than answers, and that’s the case yet again with SIXTH GRAVE ON THE EDGE. As usual, this installment is packed with so many plot threads that trying to figure out how Lorelei King managed to cover them all in under 10 hours just might make your head explode.

It’s been a while since I’ve mentioned the entertaining quotes this author uses at the beginning of each chapter, so it’s definitely worth repeating. Jones also takes it a step further in this installment with the addition of hashtags which I LOVED! Then there were the countless references to Charley’s coffee addiction that always make me feel like we’re sisters-from-another-mother. All of the spork jokes cracked me up too! The author also delves deeper into the powers of the reaper, and if you thought Davidson was badass before, just wait until you learn what other tricks she has up her sleeve. And then, there’s the mystery surrounding the prophesies, the daughter of light, and the twelve. Yes, we get some answers, but mostly it’s just more questions.

Charley’s got her hands full once again in this installment with a naked dead man riding shotgun in Misery, her on-going child abduction case, Reyes’ looming question, and then there’s The Dealer. Ooh, and of course let’s not forget that Angel’s true past comes to light, there’s news on the Mr. Wong front, and in the midst of all this chaos Charley is also playing matchmaker to Cookie and Ubie. Needless to say, life as the Grim Reaper is never dull! But, leave it to Reyes Farrow to totally eclipse the entire action packed story line with his hot self. I love how far his and Davidson’s relationship has come through the course of this series, and I think the ending of this book will be a step in the right direction for them, even though the world might not agree.

When it comes to audiobooks I consider myself somewhat of a slow listener, but I had no problems finishing SIXTH GRAVE ON THE EDGE in a day thanks to Lorelei King’s exquisite narration. Her pitch is perfectly suited for Jones’ writing style, and her voice couldn’t be any more CHARLEY DAVIDSON if she tried. You can tell that she’s having a blast while in the studio recording these, and that really comes through in her performances. It doesn’t matter whether it’s an action or sex scene; King always gives it her all which is why pre-ordering this audiobook was a no-brainer.

SIXTH GRAVE ON THE EDGE ends with a big surprise that will leave you reeling with the possibilities. I’m telling you, this could change EVERYTHING! #holyshit

24 responses to “Audiobook Review: Sixth Grave On The Edge by Darynda Jones”