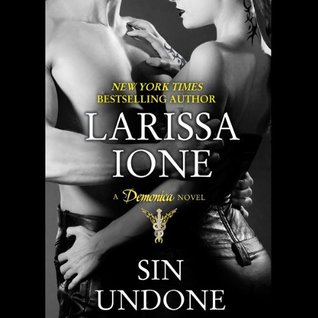 HER TOUCH IS DEADLY

As the only female Seminus demon ever born, master assassin Sinead Donnelly is used to being treated like an outcast. She spent decades enslaved, and now vows she'll die before she'll relinquish her freedom again. Then Sin's innate ability to kill her enemies goes awry: She creates a lethal new werewolf virus that sparks a firestorm of panic and violence.

HIS HUNGER CAN'T BE DENIED

Half-werewolf, half-vampire Conall Dearghul is charged with bringing in Sin to face punishment for the plague. And she's no stranger: He's bound to her by blood, and the one sexual encounter they shared has left him hungering for her raw sensuality. Worse, Sin is the underworld's most wanted and Con soon learns he's the only one who can help her . . . and that saving her life might mean sacrificing his own.


I don’t know why I’ve put off listening to this audiobook for so long because it’s hands down the best DEMONICA installment yet! Sin’s story is an emotional one full of highs and lows with plenty of toe curling sex scenes along the way. It took a while for me to get used to Ava Camille Edwards’s narration; ultimately she did an ok job I guess, but I was a little annoyed by this series’ ever changing voice even though it does fit the writing. I enjoyed the main romance as well as Luc & Kar’s side one, and loved the way Larissa Ione wrapped-up this series while also laying the building blocks for LORDS OF DELIVERANCE.

Sin’s tale was the most unique out of the Seminu demons because well, she is one of a kind after all. Her past is rather heartbreaking, and she clearly demonstrated on multiple occasions that being a succubus isn’t as fun as it sounds. Imagine not knowing that you’re a sex demon, and then on your 18th birthday unquenchable unexplainable horniness hits, and you go from being a virgin to a nympho. As a result, Sin’s only ever done the deed to feed, and has been missing out on the finer aspects of love making such as foreplay and deeper connections. She’s a very conflicted character, and I enjoyed following her growth throughout this story.

This novel’s plot revolved around Wargs which are this author’s version of werewolves. Sin’s responsible for a deadly virus that’s sweeping the globe, and instigating a civil war among the furry. I loved learning about the differences between born vs bitten Wargs, Feast Wargs, & Dhampires. Conall, the male lead, falls into the latter category, and his reasons for avoiding relationships at all costs were just as disturbing as the assassin’s. But, when these two broken characters get together they become two pieces of the same whole. The sex scenes are plentiful and HOT, not to mention creative! At one point there’s even a snowball involved…

I struggled a little with Ava Camille Edwards’s narration at first, but once I got into the story I was better able to overlook her monotone delivery thanks to Ione’s superb writing. She wasn’t bad per say, however it felt like Edward’s was straight-up reading the book instead of bringing it to life. The differences between her character voices were minimal, and her rendition of the spicy scenes left something to be desired. In my opinion, her voice is better suited for a younger POV, not a sultry succubus. She was hands down my least favourite narrator in this series.

I’d recommend reading SIN UNDONE over listening to it, but otherwise I enjoyed the conclusion to Larissa Ione’s DEMONICA world. It was great seeing all of the characters one last time, and now I’m psyched to meet the four horsemen!