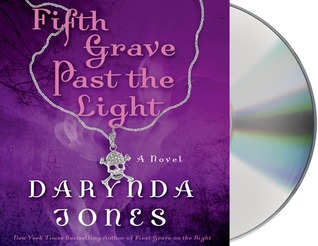 Never underestimate the power of a woman on a double espresso with a mocha latte chaser high. (T-shirt)

Charley Davidson isn't your everyday, run-of-the-mill grim reaper. She's more of a paranormal private eye/grim reaper extraordinaire. However, she gets sidetracked when the sexy, sultry son of Satan, Reyes Farrow, moves in next door. To further complicate matters, Reyes is her main suspect in an arson case. Charley has vowed to stay away from him until she can find out the truth... but then dead women start appearing in her apartment, one after another, each lost, confused, and terrified beyond reason.

When it becomes apparent that her own sister, Gemma, is the serial killer's next target Charley has no choice but to ask for Reyes' help. Arsonist or not, he's the one man alive who could protect Gemma no matter who or what came at her. But he wants something in return. Charley. All of her, body and soul. And to keep her sister safe, it is a price she is willing to pay.

Charley Davidson is at it again in Fifth Grave Past the Light, the sexy, suspenseful, and laugh-out-loud funny fifth installment of the New York Times best-selling series by Darynda Jones.


Every time I listen to a CHARLEY DAVIDSON book I know that I’m in for a wild ride, but Darynda Jones has truly outdone herself with this latest installment. We finally get a real sense of “the big picture” that’s previously only been hinted, and the infamous “key” is at long last inserted into the “lock.” Cryptic enough for you? I’m sure that long-time fans of this series know exactly what I’m talking about, but as for the rest of you… this is a spoiler-free review, so you’d best get reading!

There’s definitely no shortage of plot threads in FIFTH GRAVE PAST THE LIGHT with ghosts galore, a serial arsonist on the loose, a new client with a cheating ex husband, and then of course there’s Charley’s ongoing issues with the son of Satan. My favourite mystery out of the bunch was the one surrounding the 20 dead blondes; I loved the way Jones developed this story line, and the resolution was masterfully done. The other subplots were equally as entertaining, especially the new tidbits we learn about this series’ main arc. Mr Wong continues to be stand-in-the-corner dude, but I’m beginning to suspect that he’s there for a reason. And, that cliffhanger, well let’s just say it’s the reason why I’ve postponed listening to this audio for so long.

I’ve been DYING for more Charley/Reyes’ smexy time since I first started these books, and Jones finally delivers in this installment. I guess it’s a good thing that the author made readers wait for so long because it allowed their chemistry to reach its boiling point, but you can’t blame a girl for wanting less flirting and more “doing.” Their relationship undergoes a lot of growth in this novel—both in and out of the bedroom—and it’s clear that their romance is in no danger of waning anytime soon. The secondary characters continue to be incredibly endearing; Cookie is hands down my fav, but Garrett and Ubie aren’t too far behind.

Lorelei King brings just the right amounts of sultry and sass to these audios. She really captures the essence of Charley’s larger-than-life, smart mouthed, ADD personality, and makes you feel like she’s a real person. King is a skilled narrator with a knack for bringing the snark while still maintaining a good pace and tone. Her character voices are distinct yet remain consistent throughout this series, and she sure knows how to deliver a punch line! I can’t imagine that it’s easy reading Jones’ writing aloud with a straight face, so this woman deserves mad props for this and for her stellar performance.

FIFTH GRAVE PAST THE LIGHT is the best of the best, the crème de la crème, the pick of the litter—well, you get the idea. The Darynda Jones / Lorelei King duo is unstoppable!

46 responses to “Audiobook Review: Fifth Grave Past The Light by Darynda Jones”