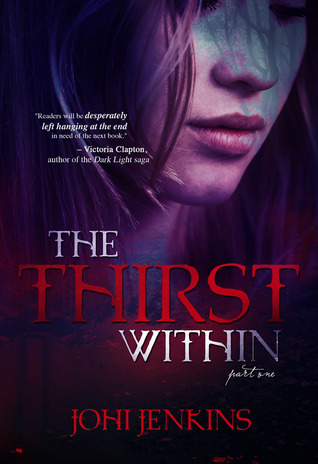 Seventeen-year-old Tori Green is an orphan—again. Raised by her grandparents in a quiet Midwest town after an accident claimed the lives of her parents, Tori must now move across the country after her last surviving grandparent passes away. To a new family that doesn't seem to care about her. To New Orleans, The City That Care Forgot.

In a city full of new faces and new experiences, Tori finds solace in her new friend, Thierry, for whom she falls head over heels despite her many reserves towards the beautiful stranger. Thierry appears to genuinely care about Tori, until his brother shows up hinting towards a relationship that can never be. What is the big secret?

Determined to find the truth, Tori will find herself torn between two very different but gorgeous vampires...

The Thirst Within is tailored for a young adult audience and contains language, mild violence, and sexual situations, not recommended for readers under the age of 17.

I first heard of this book because the author and I are in one of the same GoodReads group, and we are also friends on GoodReads. However, she doesn’t know I read this or that I am reviewing it. And I am going to be totally honest. So with that said, here goes.

Tori is an seventeen year old orphan that has just moved to New Orleans to live with her uncle and his family. She is totally out of her element, has never visited before, and has never met the family before. She is pretty much treated like an unwanted house guest for the most part. So she is more then ready to befriend the guy she meets on her first shopping trip. Thierry is every girls dream-hot, rich and super nice to her. Things go along pretty well until she meets his brother, Corben. If it’s possible, he’s even better looking then Thierry. And he totally doesn’t want to have anything to do with her. Worse, he wants Thierry to stop seeing her. Tori hates him. Or does she? Thierry and Corben have a huge secret-they are vampires.

My first problem with the book is how easily Tori accepts that Theirry is a vampire. Sure, she is shocked, but really she is just intrigued. And the way she finds out would have had me running for the hills. The author does have some explanations for this. So okay, for purposes of moving the story along it ended up working. I read a lot of vampire books. And I mean a lot. So my second problem was that I have read too many books with a very similar plot and that took me away from the story a bit as I started comparing it to other books. In the authors defense, I guess there are just so many plot lines that you can write about vampires. Then there was the love triangle and the cliffhanger ending. I don’t mind a love triangle so much, especially when it’s necessary for the story as in this case, but cliffhangers really are getting on my nerves! One redeeming factor about the cliffhanger, she posted the beginning of the next book on her blog, so I forgive her!

The very fact that I looked up her blog, is very telling. I could not put the book down and HAD to find out what happened next. A good book does that right? This book reads like a YA, but since it’s from a seventeen year old POV, that made it pretty real. There are a couple of mild sexual scenes(above the waist), and some bad language and violence that bump it up to suitable for the over seventeen crowd.

Over and above the minor problems I had with the book, I did enjoy the story and the characters.The author does know how to write a book that kept me reading far into the night. I will definitely be adding the next book to my to be read stack as soon as it comes out. If I could, I would give it 3.75 paws and I am sure there’s a lot of readers in a younger age group then me that would rate it much higher.

30 responses to “Review: The Thirst Within by Johi Jenkins”