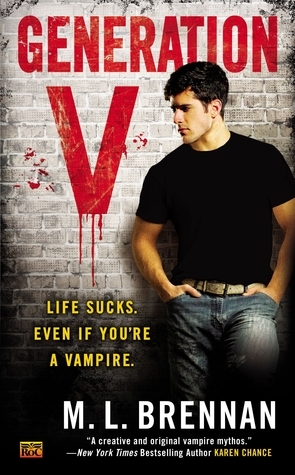 Fortitude Scott’s life is a mess. A degree in film theory has left him with zero marketable skills, his job revolves around pouring coffee, his roommate hasn’t paid rent in four months, and he’s also a vampire. Well, sort of. He’s still mostly human.

But when a new vampire comes into his family’s territory and young girls start going missing, Fort can’t ignore his heritage anymore. His mother and his older, stronger siblings think he’s crazy for wanting to get involved. So it’s up to Fort to take action, with the assistance of Suzume Hollis, a dangerous and sexy shape-shifter. Fort is determined to find a way to outsmart the deadly vamp, even if he isn’t quite sure how.

But without having matured into full vampirehood and with Suzume ready to split if things get too risky, Fort’s rescue mission might just kill him.…

I want to say upfront that this book rocked my socks off. It REALLY did—most potential I’ve seen in a new(ish) UF series in a LONG friggin’ time.

Fortitude Scott is a pushover. He lets his coworkers dump their responsibilities on him without uttering a word of protest, his roommate isn’t paying his share of the rent (and hasn’t for months), and when his girlfriend belatedly informs him that they have an “open” relationship, he does nothing.

Baby vampires are made when Mommy or Daddy vampires create host parents via MASSIVE blood-exchanges, and afterward have the hosts make a baby the old-fashioned way. The blood-exchange fundamentally changes the host parents DNA, so that any offspring have more genetically in common with the vampire than the modified humans. The baby vampire grows (MOSTLY) like a normal human child, until he (or she) “transitions” into full vamphood sometime after physical maturity.

Fort is 26 years old, and desperate to hold-off his transition for as long as he can, to the bafflement of his mother and siblings.

He also refuses to acclimatize himself to the supernatural world, preferring to live and work amongst humans. But when an Italian vampire comes to visit, and young girls begin to disappear, Fort throws himself head-long into the world he’s thus far avoided to try and save them.

2. I don’t NEED all of my MCs to be hardcore, kick-ass, take-sass-from-nobody types. Those types do tend to be my favorites, BUT I have a healthy appreciation for intelligent, out-smarting types too. And quiet, I-shall-not-be-moved types. AND committed-to-the-cause types . . .

Fort is none of these.

Fort, as I stated earlier, is a PUSHOVER. A passive-aggressive PUSHOVER.

Admittedly, the passive-aggression is oftentimes downright hysterical—really guys, I can’t remember the last time I lol’d this much while reading a book. Maybe First Grave on the Right by Darynda Jones?

Anyway, the point is that MANY times while reading this book I was disgusted with Fort. He was such a damn pansy. When his cheating bitch-of-a-girlfriend shows up at his apartment for the first time in three weeks, instead of forcing a Talk like he wants to, he allows himself to be distracted by her manipulations and taken advantage of. Again. He recognizes that his roommate has a lot of money for eating out since he’s not paying rent, but keeps letting Roommate put him off.

Did I mention that the retroactive “open” status of Fort’s relationship with his girlfriend came about after he caught Girlfriend and Roommate having sex?

So this was by no means a perfect book.

HOWEVER, Fort does finally grow a pair (at the very end), and the Bad Guy is of course vanquished. Don’t get mad—pedophile Bad Guys never live to the see the next book. And without those two problems, this book is spectacular. Anyone who enjoys a good Beta character will absolutely love this book. And the transformation is not a transformation—Fort is, and will always be, a Beta. He just won’t sit there and take it (whatever “it” is) anymore. I can live with that.

There are also a lot a interesting secondaries, Suzume Hollis being my favorite of the bunch.

A kitsune is fox-shifter from Japanese folklore. They are tricksters that often fall under the same umbrella as Coyote and Loki, and like Coyote and Loki, kitsune can be categorically vicious. Brennan paints a particularly vivid picture of this in Suze who can be alternately cute-as-a-button and absolutely terrifying. Mostly she’s just funny. The combination of Fort’s sneaky, undermining younger sibliing-like antics and Suze’s pranking and hilarious observations gets ALL the funny points.

So ultimately, I HIGHLY recommend Generation V by M.L. Brennan. I had to make myself stop reading Iron Night (book 2) and write this review, so the books wouldn’t run together. Not happy about that. Going back to reading right . . . about . . . now . . .