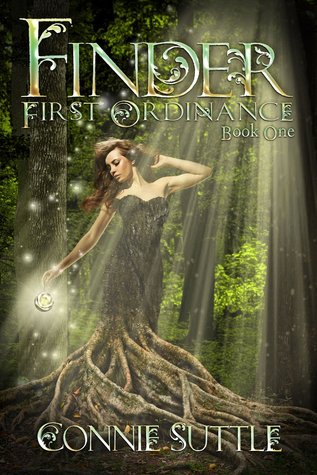 A girl never meant to be sentient.

Siriaa is dying. A poison is spreading throughout the planet and none know how to neutralize it. Finder, working in King Tamblin's castle kitchen most of her life, has never spoken. A child of questionable parentage, Finder is an orphan assigned to perform duties nobody else wants.

While others plan intrigue, murder and invasion to escape the poison's effects, Finder watches all in mute acceptance. Will she be the key to Siriaa's salvation, or will it die about her, without knowing why?

This book was recommended to me by a blogger friend and since we usually like the same sort of books, I read it. Very quickly! And very happily, as it turned out.

Finder is an orphan that was left at the King’s palace kitchen when she was two years old. She spends her time non-stop working and lives a life of a drudge. Her name comes from her ability to find anything that is missing. What no one knows is that she has all sorts of abilities that she hides from everyone. That she knows when bad things are going to happen is just her normal. And oh yes, Finder is mute. The reader begins to wonder early on who Finder really is-is she really an orphan or could she be much more then that, and no, I am not necessarily referring to her special abilities.

The world the author has built seemingly takes place in a time pretty close to or similar to the Middle Ages, or close enough. The author has also built two more worlds in this story. I found each of these worlds to be fascinating and very well done. Due to spoilers, I really can’t explain or the book could be ruined for the reader. Suffice it to say that not everything involves the first world’s time period.

I absolutely loved the character of Finder. She was a completely different sort of character involved in new and way different types of worlds then I normally read about. The pages just flew by as I immersed myself in each of these worlds that Finder gets involved in. Along the way, there’s murders, kidnapping, assaults, abuse, and mega amounts of intrigue. Villains almost outnumber the good guys in some of these worlds.

Connie Suttle is a wonderful story teller, and this is actually the seventh book I have read by her. She knows how to pull you into the story and keep you totally invested in both the story and the characters. My only issue with this book is the number of characters and the names of the characters that you have to keep up with. At about 75% of the way through the book, I became lost at times. Some of the names were so close to being the same names, I became even more confused. It took a little away from the book for me but not a lot. And I would be remiss if I didn’t mention the cliffhanger. Not a fan. I still really enjoyed the book and actually can’t wait for the next one.

If you like a young adult read with a very imaginative story, you may want to check this out. Due to violence and abuse(not sexual)I would suggest it for older teens to adults. I want to also mention the beautiful cover-not only is it a great cover but I think it has a lot to say about Finder and her abilities.