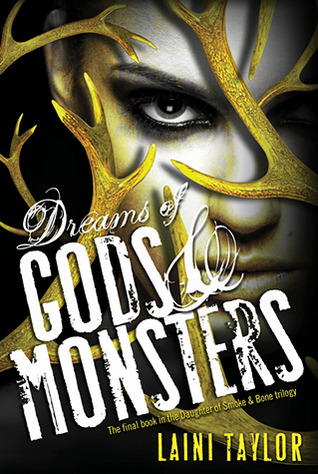 In this thrilling conclusion to the Daughter of Smoke & Bone trilogy, Karou is still not ready to forgive Akiva for killing the only family she's ever known.

When a brutal angel army trespasses into the human world, Karou and Akiva must ally their enemy armies against the threat--and against larger dangers that loom on the horizon. They begin to hope that it might forge a way forward for their people. And, perhaps, for themselves--maybe even toward love.

From the streets of Rome to the caves of the Kirin and beyond, humans, chimaera, and seraphim will fight, strive, love, and die in an epic theater that transcends good and evil, right and wrong, friend and enemy.

I love pie. This is not a secret. I particularly love blueberry pie (which is weird b/c I HATE blueberries). My husband does too. So much that on his birthday, he’d rather have pie than cake. I’m happy to oblige, but b/c I’m a miser and a glutton (when it comes to pie), I always make two—one for guests, and one for me and the hubs when they leave. I eat our pie for breakfast with a ginormous scoop of Edy’s vanilla bean ice cream.

Anyway, the further we get from the hubs birthday, the more covetous I get of the pie. Three days after the fact, it no longer seems like Birthday Pie, it’s just pie, so the slices get progressively larger until I make myself sick of pie.

That’s the best analogy I can come up with for Dreams of Gods & Monsters. I love this book, I love this series, but I think I gorged myself on it. I crammed all 600+ pages in without really letting the individual parts settle, so that I’m left with a confused mishmash of conflicting emotions: I’m happy, I’m sad. I’m annoyed, I’m elated. I feel cheated, I’m satisfied.

Since I can’t talk about what happens, I will tell you that this final book strikes a happy balance between the series’ previous installments, so regardless of whether you preferred Daughter of Smoke & Bone, or Days of Blood & Starlight, you’ll like this one. It has some of the drama and angst of book 2, but most of that is resolved quickly and painlessly, enabling the warm fuzziness and wonderment of book 1 to prevail.

Until the next Bad Thing happens, anyway.

And I think that is my issue with this book, and the reason that it’s not five stars—it’s the roller coaster to END ALL roller coasters. A Bad Thing happens, and is quickly resolved. But then another Bad Thing happens, and another . . . I feel like I have whiplash. That may sound intolerable to a lot of you, but Taylor is clever about it. She consistently breaks up the Bad Things with witty banter à la Zuzana, intriguing breaks in the main story to introduce and flesh-out a new character, AND the immense character growth of one particular secondary that transformed one of my least-liked characters into a favorite.

So it sneaks up on you. “It” being the emotional exhaustion.

I think I would have been fine if I went slowly and gingerly into the reading of this book. But I didn’t. Like with pie, I gorged, and was left feeling unhappy and slightly nauseous. So that’s my recommendation: take your time with this one b/c SO much happens, you will likely be overwhelmed, if you rush through it. Take the time to process.

1. It is more than obvious that Taylor plans to write more about this world. She may do that by writing more Karou and Akiva-based novels, or she may write a spin-off. The door is WIDE open for either or both.

2. One of my favorite movies is The Mummy (don’t judge), and one of my favorite parts is when Evelyn says to Benny, “You know, nasty little fellows such as yourself always get their comeuppance.”

3. Embrace the words, “Must not panic,” for you will need them.

SO. Dreams of Gods & Monsters is a magnificent conclusion to what will probably remain one of the most popular series in its genre. An incredible new world filled with fantastical people and creatures provides the backdrop for a love story to outlast the ages. The melding of mythologies is brilliant and will suck you in from the very beginning. I recommend this series to EVERYONE who has even the tiniest inkling of interest in fantasy literature. Read this series, read it NOW! Or, you know, whenever, BUT you’ll be the one missing out, if you delay. *wink*

76 responses to “Review: Dreams of Gods & Monsters by Laini Taylor”