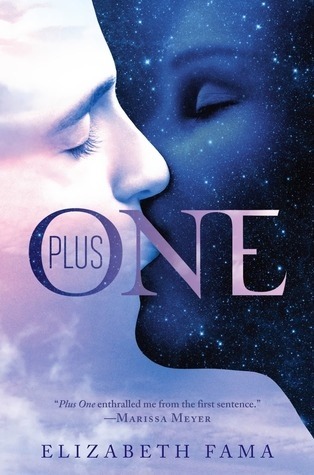 Divided by day and night and on the run from authorities, star-crossed young lovers unearth a sinister conspiracy in this compelling romantic thriller.

Seventeen-year-old Soleil Le Coeur is a Smudge—a night dweller prohibited by law from going out during the day. When she fakes an injury in order to get access to and kidnap her newborn niece—a day dweller, or Ray—she sets in motion a fast-paced adventure that will bring her into conflict with the powerful lawmakers who order her world, and draw her together with the boy she was destined to fall in love with, but who is also a Ray.

Set in a vivid alternate reality and peopled with complex, deeply human characters on both sides of the day-night divide, Plus One is a brilliantly imagined drama of individual liberty and civil rights, and a fast-paced romantic adventure story.

LOTS of dystopians flooding the YA market these days.

That doesn’t particularly bother me, but as is true when a market is flooded with anything, I’ve had to become more selective in deciding which dystopians to actually read. I needed to create a method of separating the wheat from the the chaff, the silver from the dross, the smart and fresh and original dystopians from the bored and stale and copycat dystopians.

It hasn’t been easy or even 100% accurate, but I have saved myself a multitude of tears and recriminations by following these three simple rules:

1. Avoid dystopians with direct and obvious comparisons to The Hunger Games.

2. If it’s part of a series, wait for book 2’s reviews before committing.

3. Dystopians featuring supernatural or SFF elements are typically safer choices (for me anyway) than straight-up dystopians or post-apocalyptic dystopians (I don’t have a survivalist bone in my body).

So when I heard speculation that Elizabeth Fama’s Plus One was loosely based on a retelling of George MacDonald’s The Day Boy and the Night Girl, I jumped on it. It’s no secret that I love fairy tales and retellings of fairy tales, and the fact that Plus One was potentially based on such an obscure fairy tale only further sold it b/c I like obscure.

BUT . . . as it turns out, some ideas don’t work very well for dystopians, so whether or not Plus One is based on a fairy tale or an entirely new endeavor becomes irrelevant b/c it just doesn’t make sense.

Lots of things. The idea that people could feasibly be separated into two groups that were subjected to curfews based on whether they were “smudges” who were supposed to be active during night hours, or “rays” who were supposed to be active during day hours. And this was a totally arbitrary separation that was perpetuated by any new offspring being automatically assigned the same designation as the parents.

Not genetics. Not abilities.

And yes, about 30% in you were given a reason for the original separation, and I guess I could sort of make sense of it, HOWEVER there was absolutely no legitimate reason to continue the policy after the situation resolved itself. Which it did around 80 years ago.

ALSO—by “night” hours and “day” hours I mean two, equal twelve-hour shifts. But according to the book smudges lived in darkness and rays lived in sunlight and never the twain shall meet . . .

AND the equality of the original separation made it difficult to believe that over such a short period of time, the smudges became so persecuted by the rays. The wacky separation thing started as one whole, divided equally into halves. But less than 100 years later, one half of the population completely subjugated the other? When the subjugated half was, for nebulous reasons, more numerous?

And seriously . . . what was with all the baby-snatching? It was kind of silly.

BUT despite the holes in the world-building and traveshamockery of Soleil’s “plan,” there were immensely enjoyable parts to Plus One. Just b/c I knew immediately where Fama was going with the “desk buddies” part of the plot, doesn’t change the fact that it was lovely when Soleil and D’arcy finally figured it out. And as impulsive and adolescent as Soleil could be, I still found her to be both wildly entertaining and lovable. And D’arcy was just wonderful. The characters and their relationships were the clear strengths of this novel and they made this a somewhat enjoyable read all on their own.

It all felt kind of rushed though. With the seemingly unfixable holes in the world-building, I’m not sorry this was a standalone, but the ending was somewhat unresolved—the kind of ending where you’re left with all the possibilities, and it’s up to you to decide what happens after that last page. Sometimes that can feel hopeful, but Soleil was such a resolutely pessimistic character that it was hard to do that here. You know what you want to happen, but it seems highly unlikely that it will.

So if you’re the kind of reader who is more about connecting with the characters so that you feel something, and you like a slow-build before getting to the action, you’ll probably love Plus One. But if you’re a hardcore lover of pristine, noncontradictory worlds, I’d pass. As much as I loved Soleil and D’arcy, and a few other characters besides, I ultimately couldn’t get past my own lack of belief in their situations. But as I’ve said before, every reader is different, and my imagination isn’t what it used to be. You might have no trouble at all accepting the world of smudges and rays. If it sounds interesting to you, try it out and tell me what you think. Maybe if you’re convincing enough, I’ll believe in it too *wink*

92 responses to “Review: Plus One by Elizabeth Fama”