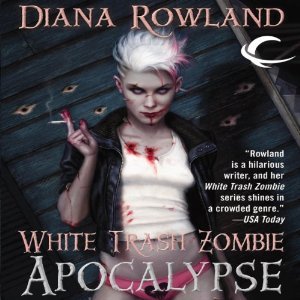 Our favorite white trash zombie, Angel Crawford, has enough problems of her own, what with dealing with her alcoholic, deadbeat dad, issues with her not-quite boyfriend, the zombie mafia, industrial espionage and evil corporations. Oh, and it’s raining, and won’t let up.

But things get even crazier when a zombie movie starts filming in town, and Angel begins to suspect that it’s not just the plot of the movie that's rotten. Soon she's fighting her way through mud, blood, bullets and intrigue, even as zombies, both real and fake, prowl the streets.

Angel’s been through more than her share of crap, but this time she’s in way over her head. She’ll need plenty of brainpower to fit all the pieces—and body parts—together in order to save herself, her town, and quite possibly the human race.

I’ll be honest, I was concerned whether I’d like this installment after having found the previous one a tad too over-the-top in the zombie conspiracies department, and also lacking in classic Angel moments because—let’s face it—I read this series mainly for her crass humour. WHITE TRASH ZOMBIE APOCALYPSE has a nice mix of both, so even though I found the story slow to start off, I ended up really enjoying it. Allison McLemore’s Southern twang is always a joy to listen to, and Diana Rowland’s character development skills are out in full force which made me exceedingly happy—or as Crawford would say: “props to stubborn bitch willpower for saving the day.”

Marcus has been Angel’s on-again-off-again boyfriend for three books now, and even though the author has explained why he acts like a giant tool most of the time, I’m still not convinced that he’s “the one” for her; especially now that there are some new contenders! I hope Rowland will either love him or leave him in the next installment (even though there are strong hints that that won’t be the case) because I prefer a story’s action to revolve around the plot rather than a couple’s issues. But, that’s just me. There’s also the whole zombie aspect to consider because even though I like Nick’s character, I’m not convinced a relationship with him would be possible. Now Brian on the other hand…

Crawford’s love life aside, I was thrilled that her trailer trash-edness was the focus of this novel because I’d noticed its absence in EVEN WHITE TRASH ZOMBIES GET THE BLUES. There’s still plenty of outlandish zombie drama in book 3, but it felt like Angel maintained her sense of self through it all instead of becoming one of Pietro’s minions. She makes her own decisions and doesn’t let the “more experienced zombies” boss her around. Crawford also doesn’t try to hide who she is; I like that she acts the same whether she’s talking to a senator or her deadbeat dad.

New plot threads are introduced as well as some additional secondary characters which makes me excited about the future of this series. Heck, Allison McLemore’s narration alone makes these audiobooks worthwhile listens because just hearing her talk Angel-speak is wildly entertaining. On top of nailing the main heroine, she also does a mean Marcus, Philip, Nick, Derrell, Brian, Pietro… well, you get the idea. McLemore transitions easily between POVs, and each character has a distinct voice that stays consistent from one installment to the next.

WHITE TRASH ZOMBIE APOCALYPSE combines the fun tone of book 1 with the mafia aspect of 2 to deliver the best of both worlds. Or, as Angel would say, it’s “corporate espionage on steroids and brains!”