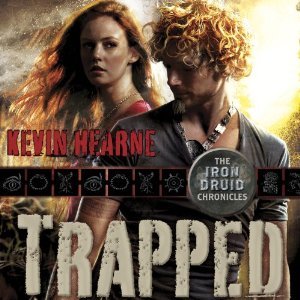 After 12 years of secret training, Atticus O'Sullivan is finally ready to bind his apprentice, Granuaile, to the earth and double the number of Druids in the world. But on the eve of the ritual, the world that thought he was dead abruptly discovers that he's still alive, and they would much rather he return to the grave.

Having no other choice, Atticus, his trusted Irish wolfhound, Oberon, and Granuaile travel to the base of Mount Olympus, where the Roman god Bacchus is anxious to take his sworn revenge - but he'll have to get in line behind an ancient vampire, a band of dark elves, and an old god of mischief, who all seem to have KILL THE DRUID at the top of their to-do lists.

This was probably my least favourite installment to date; that being said, I’m still giving it four stars because Kevin Hearne’s humor and sharp writing continue to dazzle me even though in this particular instance the story did not. TRAPPED felt like a segue book; it’s twelve years later and the time has come for Granuaile to become a druid, but in order for that to happen the author had to tie up a few loose ends and introduce new plot threads. I still found it to be an enjoyable listen; Oberon always manages to bring a smile to my face, and Luke Daniels is an incredibly talented narrator who could make algebra sound interesting.

All of the previous novels in this series have revolved around a particular lore whether it is the Tuatha Dé Danann or Thor the thunder god. This installment introduces Olympian mythology which I’m assuming will be the main focus of HUNTED and dabbles in Norse a bit as well, but otherwise it’s mostly about Granuaile. When she first showed up in THE IRON DRUID CHRONICLES I wasn’t sure exactly what to expect, but her character has grown on me over the last few novels, and she really shines in this latest one. I like how she challenges O’Sullivan at every turn and yet is still the yin to his yang. I was so happy with the turn their relationship takes in TRAPPED.

I continue to consistently laugh out loud whenever I listen to these audiobooks. Oberon’s up to his usual antics except this time it’s a new religion called Poochism, and he now gets double the attention because Granuaile can speak to him too. Atticus’ “Nigel from Toronto” identity makes another appearance along with a fun (and accurate) pop culture reference about the Leaf’s hockey team and their penchant for suckage (fyi I’m a Habs fan). In fact, this novel is full of Canadian Easter eggs because the gang even hides out in good ol’ Manitoba for a stint. O’Sullivan’s fifteen centuries of blaming the dark elves for EVERYTHING finally comes to bite him in the butt too when they decide that enough is enough.

Luke Daniels continues to hold me in thrall with his infectious energy and authentic narration. His enactment of Oberon is always good for a chuckle, and he makes a splendid Atticus O’Sullivan as well. Heck, even his rendition of Granuaile is good! I don’t think I’d be finding this series nearly as entertaining as I am without his voice in my ears. Daniels is equally as skilled at delivering punch lines as he is upping the pace during the action scenes; although, this installment was a little tamer that its predecessors because he didn’t have to read from a giant squirrel’s POV or sing one of the wolfhound’s silly songs.

I gave my guy book 1 for Christmas, and at the time of this review’s writing, he’d jumped ahead of me and had already started reading HUNTED; I’m told that it’s his favourite installment so far. Now, coming from a man who normally reads only a couple of novels a year read, six in two months is a testament and a half to this series’ awesomeness. TRAPPED is the worst of the best and when you’re talking about Kevin Hearne’s writing that still means that it was pretty darned good.