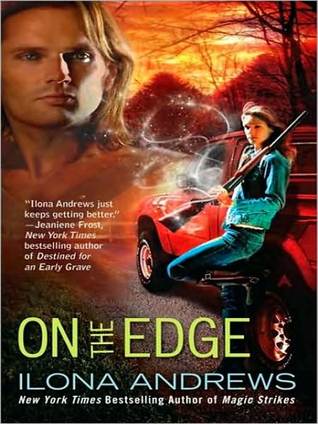 The Broken is a place where people shop at Wal-Mart and magic is nothing more than a fairy tale.

The Weird is a realm where blueblood aristocrats rule and the strength of your magic can change your destiny.

Rose Drayton lives on the Edge, the place between both worlds. A perilous existence indeed, made even more so by a flood of magic-hungry creatures bent on absolute destruction.

In a lot of ways this book felt like the Fantasy equivalent of Paranormal Romance; it’s less action-y than Ilona Andrews’ KATE DANIELS series, but the sex scenes are not left to the imagination (unlike in Urban Fantasy) and the strong world-building continues to be at the forefront of their writing. The romance is as far from insta-love as you can get which is a definite plus, and the ending was satisfying, although I was hoping for a second installment before jumping to another couple because I felt the HEA was somewhat incomplete.

Many of my fellow readers struggled with the backwoods aspect of this story, but personally, I found Rose very relatable. Being a bit of a hick myself, I appreciated the country bumpkin humour and the Edgers “different” way of doing things. I liked the well thought out explanations for Drayton’s mistrust of men, and the courtship challenges made for one of the more interesting wooing pursuits that I have ever read. Rose’s dedication to her brothers, her mad flash skills, and snark made her the perfect heroine for this tale. Her strong personality helped dull the aristocratic high-handedness of the story, and the women-are-possessions mentality became almost comical when applied to Drayton.

THE EDGE universe was amazing, as expected. I enjoyed learning all of the ins and outs of the Broken, the Edge, and the Weird. The magical rules are as complex as in the KATE DANIELS novels, but this is in no way a spin-off of the latter which means there’s a whole new set of intricacies to grasp—all the better in my opinion, because Andrews’ world-building is the reason why I keep coming back for more. I loved learning about the bizarre creatures, the inner workings of blueblood society, and the various supernatural abilities of the characters. Georgie and Jack were adorable, and I’d be interested in learning more about William who, as it turns out, is the male lead of book 2. The plot wasn’t overly complicated, but still detailed enough to hold my interest.

Renée Raudman continues to be one of my favourite narrators; her passion and intensity really shine through in this audiobook, and I had no problem with equating her to Rose Drayton even though she’s been the voice of KATE DANIELS inside my head for six installments now. Her character voices are distinct and she mirrors the pacing of the writing well. Raudman definitely has a knack for portraying strong female protagonists!

ON THE EDGE demonstrates Ilona Andrews’ versatility as an author(s), and is a great alternative for Paranormal Romance lovers looking for a bit more action in their reads.

52 responses to “Audiobook Review: On the Edge by Ilona Andrews”