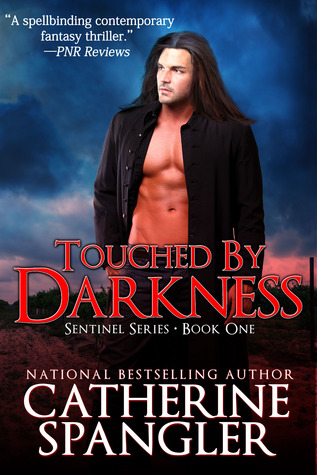 After seven years on the run, Dr. Kara Cantrell believes she and her son, Alex, are safe. She’s wrong.

Kara settles in the sleepy town of Zorro, Texas, convinced that she and her child have escaped the sinister reach of a supernatural underworld. But the appearance of Damien Morgan, a dangerous, alluring man with superhuman abilities, upends her quiet existence.

Damien realizes that Alex is a fledgling Sentinel, and Kara is a matched, psychic conductor for him. She wants nothing to do with him, refusing to revisit the hell she experienced seven years ago. But she has no choice, as her son is projecting his abilities, leaving him vulnerable to unseen forces. Not only that, but someone—or something—is murdering people in Zorro.

Kara is forced to work with Damien, tapping into a mystical link that triggers desires both of them must ignore. But as they work together to protect her son, and to track the killer, evil stalks them, reaching out—with the touch . . . of darkness.

Supernatural beings that aren’t werewolves, witches or vampires? That’s what you get with this book. It’s part one of a trilogy about a group of beings named Sentinels, reincarnated from Atlantis, by way of another galaxy. Sentinels are tasked with killing the evil beings from their world, called Belial. Since it’s an older book(although a re-release I think), it may not be a new read for you, but once I found it, bought it and started it, I read it non-stop and totally enjoyed myself along the way. It was a one day read for me this week.

The story centers around Kara, a doctor with a young son, Alex. She has moved to a small town in hopes that she can escape the supernatural nightmare of six years before. Alex’s father, a Sentinel, was killed right in front of her by a Belial. After his death, she runs when she finds herself pregnant. She doesn’t want her child to be touched by the world of his father, but that’s all about to change, as Alex is coming into some of his powers. Damian is a Sentinel and he is chasing a Belial that he believes is living in the same town as Kara. Since Belial’s take over bodies, everyone in town in suspect-especially the weak or the sick. He is shocked to realize that Kara is a conductor and a match to help him to do his work. But he is more surprised that Alex’s power is unprotected and transmitting loudly for any Belial to hear.

This ended up being a really good romance and actually a who done it. We meet all sorts of the towns people, and I never figured out who the Belial was. The way a Belial receives energy is by killing people, so they are pretty much psychopaths. There are several murders and lots of suspects. It’s up to Kara and Damian to save the day. Did I mention that conductors and Sentinels work best while having sex? Oh yes. So there are some pretty steamy scenes involved and they were very well written, as is this whole book. The characters were interesting and each had an intriguing back story.

I really liked the story, the characters and the mystery. The premise is different then the usual paranormal romance and I totally was on board for that! This is the first book by this author that I have read, and I will definitely be buying the next book in the series soon.

26 responses to “Review: Touched by Darkness by Catherine Spangler”