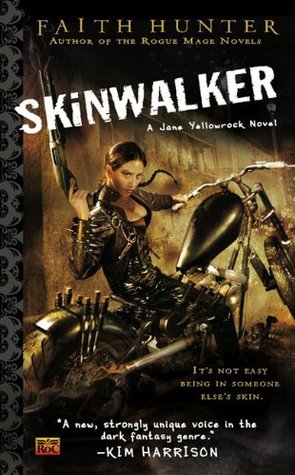 Jane Yellowrock is the last of her kind-a skinwalker of Cherokee descent who can turn into any creature she desires and hunts vampires for a living. But now she's been hired by Katherine Fontaneau, one of the oldest vampires in New Orleans and the madam of Katie's Ladies, to hunt a powerful rogue vampire who's killing other vamps...

Urban Fantasy is a pretty diverse genre. There are all kinds of twists on various folklores and mythologies, as well as multitudes of different takes on a myriad of supernatural creatures. We all have our favorites (and not-so-favorites). For me, if it has something to do with the Fae or Native American folklore, I’m probably going to love it. Ghosts, zombies, and other dead things in general (excepting vampires) . . . not so much. There are of course exceptions. I’m not a huge fan of C.E. Murphy’s Walker Papers series, while I love the Harper Connelly series by Charlaine Harris. But generally speaking, if I see words like necromancy, ghosts, or zombies, I’ll go to great pains to avoid it, while when I see words like sidhe, tuatha de danann, coyote, or skinwalker, I squeal and make grabby hands.

Which is exactly what happened when I  came across Skinwalker by Faith Hunter.

When I first started reading Skinwalker, I thought that maybe I had gotten confused, and it wasn’t the first book in the series. Jane had just arrived in New Orleans to start a new job after healing from her previous job.

Yeah, the one where she and her friend Molly took out an entire family of rogue vampires, and she almost got her throat ripped out.

But it really was the first book, and the references to that first job were meant to entice you into reading the prequel story released in an anthology the same day that Skinwalker was released. It totally worked (on me), but it’s not necessary that you read Signatures of the Dead in order to understand the rest of the series. It’s very good, but it just fills out the bare-bones of the story that you learn about in Skinwalker. Fyi (just so you don’t scratch your head, wondering what’s going on like I did).

So. Jane in New Orleans for a new job. Right.

She motors up (on her badass, one-of-a-kind motorcycle) to Katie’s Ladies (a house of ill-repute) to finalize her contract with Katie of Katie’s Ladies, who is on the New Orleans Vampire Council, and who is hiring Jane to find and kill a rogue vampire who has been terrorizing the city, killing both vamps and humans.

And Jane is very good at her job.

There are so many things that I love about this book that I think I’m going to have to make a list. Lists are what I revert to when my brain feels full b/c I’m overwhelmed with all the goodness that was a book. SO—Why Jane Yellowrock Rocks My Socks Off:

1. She’s my favorite type of MC—tough on the outside, soft on the inside, both sympathetic and seriously kick-ass, not to mention hilariously full of snark.

2. BEAST. I’ve heard all kinds of complaints about Beast. Some as simple as, “I don’t like her, she’s distracting, annoying, etc.” Well, that’s your opinion and you’re entitled to it. I, however, LOVE Beast. She makes Jane a much more complex character, and her insights as a hunter and predator while Jane is on a job only add depth to the story.

3. Angelina. I’m a sucker for cute kids as secondary characters. When Julie showed up in book 2 of Kate Daniels, I was a goner. Angie-baby’s even more potent b/c she’s what? Four years old? Adorable.

4. Firm rules in reference to sups—I absolutely HATE it when authors try to polish and sparkle the existence of all things supernatural. You know what I’m talking about: vampires that don’t struggle with bloodlust, shifts from human to animal and back that happen in the blink of an eye and are painless, necromancers who only need to close their eyes and concentrate for a second or two to call up a specific spirit. No. Just, no. It takes time for Jane to change forms, and when she does, she’s starving b/c of the enormous amount of energy the change required. If she wants to be bigger or smaller than she is in real life, she has to either get the mass from somewhere, or store it somewhere. And Hunter’s vampires are vampires, predatory instincts and obvious lack of humanity included. I appreciate that.

5. The MEN. Rick, Leo, Bruiser, take your pick, they are all . . . SERIOUSLY hotcha hotcha. The twins aren’t bad either. Yes, TWINS.

And that’s where I’m going to end this expression of fangirlishness (but only out of self-respect, not necessity).

Skinwalker by Faith Hunter is the brilliant beginning of the Jane Yellowrock series. It takes you on a wild ride through the eyes of a puma concolor, on the roof of moving vehicles, all to catch a killer whose identity will surprise even veteran mystery readers. So if you’re looking for a tough-as-nails heroine who redefines what it means to be a vampire hunter, Jane Yellowrock just might be your girl. And Beast is pretty darn cool too.