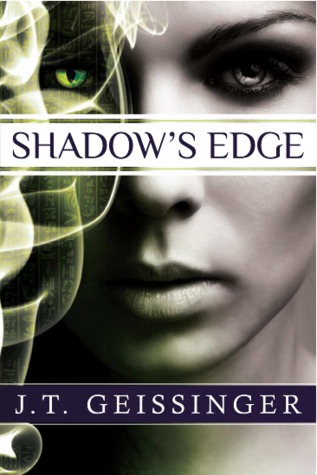 Deep within the primeval forests of southern England, a race of beautiful, savage shape-shifters lives hidden from the everyday world. Bound together by ancient bloodlines and a ruthless code of secrecy that punishes traitors with death, the Ikati send their leader Leander on a mission to capture one raised outside the tribe before she can expose their secret. When Leander tracks the unsuspecting outsider to Southern California, the hardened warrior is prepared for a fight—but not for the effect the sensual young beauty has on his heart.

Jenna spent her childhood in hiding, on the run from someone—or something—her parents refused to discuss. She trusts no one, not since her father’s mysterious disappearance, not since her mother’s sudden death, and definitely not since she began exhibiting strange, superhuman abilities. When handsome, enigmatic Leander appears, promising answers to the mysteries that shroud her past, she knows she shouldn’t trust him either. But their connection is undeniable, and as powerful as the enemy hell-bent on destroying every one of their kind…

This is the world of the Ikati. Never heard of it? That’s because it’s a secret world, one that is isolated from the human world, and rarely touches it. It’s also one of my very favorite worlds to read about and immerse myself in. J.T. Geissinger has imagined a world where panther shifters have a secret society and live in secret bastions in different part of the world.

Jenna is anything but a typical American girl. She is alone in a world where she is clearly different. She has spent her life hiding her special abilities from everyone. She is approaching her twenty fifth birthday, the birthday when an Ikati first shifts to panther form. She doesn’t know this. She becomes aware that she is being watched by a strange group of three beautiful people. They have come to California to find her to see if she manifests any of the many different abilities that only an Ikati can have. Jenna is only half Ikati so they don’t expect a lot from her, even though her father was one of their strongest Alpha’s ever. The leader of the Ikati group from England, Leander, sees Jenna and immediately is drawn to her. It isn’t long before he realizes how talented she really is. Now all he and the others with him have to do is talk her into going to England and taking her place among their group-the one thing her deceased mother had always warned her from doing.

The characters of Jenna and Leander were very well realized by the author. I really liked Jenna and felt for her situation-not knowing what she is or where she truly belonged. Leander was a total alpha male and at times not my favorite character. But I got over it, as it ended up being such a good romance. And really who wants cookie cutter characters? I don’t. I was also intrigued by his brother and second in command, Christian. In a way, I liked him better then Leander and he does get his own book eventually, one that I absolutely loved! (Book#4)

I loved this book and the entire series. The world building was pretty genius. This becomes more and more apparent as you read the series. The author has realized a world that is both fascinating and at times, not exactly perfect. Ikati politics are not always fair and those in charge are not always good. There is also a group that knows about them and makes it their life’s purpose to eradicate them. This makes for suspense and mystery, in addition to a really good, pretty steamy romance.

This for me was the type of series that you read the book and have to immediately buy the next one. There is four so far and one more is due out in June. I think that one is the last one and I will be so sorry for it to be over. Any paranormal romance /urban fantasy fan should enjoy this well written and totally intriguing story.

Full disclosure-I am a member of this author’s street team.