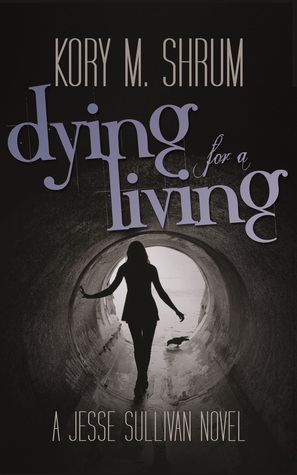 On the morning before her 67th death, it is business as usual for Jesse Sullivan: meet with the mortician, counsel soon-to-be-dead clients, and have coffee while reading the latest regeneration theory. Jesse dies for a living, literally. As a Necronite, she is one of the population’s rare 2% who can serve as a death replacement agent, dying so others don’t have to. Although each death is different, the result is the same: a life is saved, and Jesse resurrects days later with sore muscles, new scars, and another hole in her memory.

But when Jesse is murdered and becomes the sole suspect in a federal investigation, more than her freedom and sanity are at stake. She must catch the killer herself—or die trying.

I found this book a couple of days ago and it was so different and readable that I could not put the book down. When the premise of a book causes me to ignore my huge “to be read” pile, you have to know I loved it.

Jesse Sullivan is a rarity in this world that the author has created. She is what is known as a Necronite, or as some people call her-Zombie(just don’t let her hear you call her that!). Jesse works for an agency that does death replacement. In other words, she takes the place of the person that is going to meet with a bad end and when she wakes up a couple of days later, she is regenerated. There are also people with the job of “seeing” when a person will die, within a 24 hour window. For a price, people can hire Jesse’s services. It was intriguing to me how the death replacement takes place, the rejuvenation, the seeing person’s job, and the role the agency plays in this.
There’s also discrimination by the general public against Jesse that could really apply to other aspects of society.

I absolutely adored the character of Jesse; anyone that can be as snarky as she is, while doing a pretty morbid job, fascinated me. I mean, she wakes up to a mortician trying to make her look alive and it’s just a normal day in her life! Needless to say, she is friends with the mortician, because it happens all the time. The story is told from her prospective and for me, it really worked. There were several moments that I laughed right out loud-always a good thing while reading. Other characters that were important are, Ally and Lane. Ally is her assistant, her best friend and her previous, sometime lover. Lane is her hunky booty call, but he is also wanting to be much more. Made for a pretty interesting love triangle of a different sort. Rounding out the main characters is her mentor/manager, Brinkley. While not lovable, he was an interesting character as well, with a pretty big part to play in the story.

So, we have a very well written book, with engaging characters, an interesting premise, a love triangle, and on top of that, there’s mystery, some violence and suspense. Murders, attempted murders, and kidnapping also play out in this story. Sexual situations are implied but not really shown. If you love a good, really different, paranormal story, you need to read this book. There’s not really a cliffhanger, but I still can’t wait for the next one in this series.

10 responses to “Review: Dying For a Living by Kory M. Shrum”