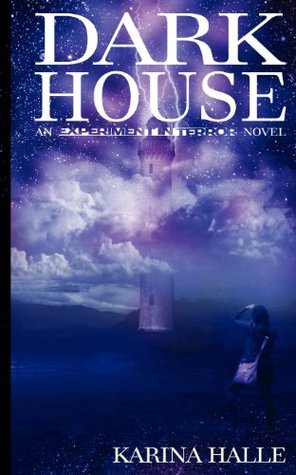 With all the vampire, werewolf and faerie books out there, it's easy to become numb to all things supernatural. The antidote? Darkhouse introduces two real and unforgettable characters, Perry Palomino & Dex Foray, amateur ghost hunters who are "attractive, relatable and oddly heroic," "flawed but loveable," "slightly crazy" and just the most endearing pair to ever tackle the paranormal...just don't call them normal. Darkhouse is a thrilling and sexy new take on concepts like Supernatural and The X-Files, bringing a breath of fresh air to a genre that has been inundated with the dead.

"There's always been some­thing a bit off about Perry Palomino. Though she's been deal­ing with a quarter-life cri­sis and post-college syn­drome like any other twen­tysome­thing, she's still not what you would call "ordi­nary." For one thing, there's her past which she likes to pre­tend never hap­pened, and then there's the fact that she sees ghosts. Luck­ily for her, that all comes in handy when she stum­bles across Dex Foray, an eccen­tric pro­ducer for an upcom­ing web­cast on ghost hunters. Even though the show's bud­get is non-existent and Dex him­self is a mad­den­ing enigma, Perry is instantly drawn into a world that both threat­ens her life and seduces her with a sense of impor­tance. Her uncle's haunted light­house pro­vides the per­fect cat­a­lyst and back­drop for a hor­rific mys­tery that unrav­els the threads of Perry's frag­ile san­ity and causes her to fall for a man, who, like the most dan­ger­ous of ghosts, may not be all that he seems."

Rated 16+ for language and gore.

First let me start by saying that I have read all of the Experiment in Terror books by this author-including all the novellas. The series isn’t over yet and when it is, I plan to lobby for more. Why? Because it is absolutely one of the best paranormal romance series that I have ever read. The biggest reason for my love of these books is the characters, in particular Perry and Dex. They are among my top three or four favorite couples of all books I have read.  EVER. The crazy, wild and sometimes, outrageously over the top romance, never for one minute gets old. The outrageous part is mainly due to Dex. He is what I would call, a character of a different sort. He is not always politically correct, he loves sexual innuendos, he is kind of crazy at times, and when Dex and Perry first meet, he already has a beautiful girlfriend. He might not be your book boyfriend after this book, but I wouldn’t bet against it after a couple of books in.

Perry is twenty two, working in a dead end job as a receptionist, and lives with her parents. The end result of a high school past full of drugs (and other even more sinister things that we find out later), Perry is just barely living her life. During a trip with her family to visit her uncle that lives on the coast, Perry decides to explore the old, haunted lighthouse on the property. Of course she does this at night and unbeknownst to her, someone else is also exploring it at the same time. Dex is ten years older then Perry, extremely good looking, and is scoping out the lighthouse for a possible new internet series about ghost hunters. The scene when they meet is pretty spooky, as is quite a bit of this book. Needless to say, Perry jumps at the chance to be the host of the show, with Dex as the cameraman.

I re-read this recently,  so it would be fresh in my mind to review. The book pulled me right back into the story, regardless of it being a re-read. At a really scary point, even though I already knew what happens, I had to put it down, as it still had the power to scare me. Yep, I’m a wuss. But I will say, this is not the spookiest of this series-at least not to me- that’s reserved for the book titled, Dead Sky Morning. It still gives me chills to think about that particular book. This series is not one of those that you read and forget the individual books. Each book tells a different chapter of their ghost hunting shows. Along the way, lots of unexplained phenomena is featured on the show, so it’s not just about ghosts, but there isn’t a werewolf or vampire to be had here. Lots of ghosts, demons, scary shape shifters and even zombies are featured in different books. With each of these chapters, more and more of Dex and Perry’s romance is told. And it is not typical in any way, but then, Perry and Dex aren’t typical. Each of them has their own scary story in their past(and actually also in their present), but work really hard in different ways, to keep this buried.

This is not a Young Adult series. This first book is probably appropriate for ages 16 plus but as the series progresses, it is more an age 18 plus due to sexual situations, language and some violence. This author knows how to write an engaging story, with intricate story lines, and while this series is self published, she is also traditionally published with her bestselling, Sins and Needles series. If you enjoy something a bit(or a lot, depending on what you read) different in the paranormal romance genre, I would recommend this book. But then I also recommend it to any adult because it is just such a wonderful series.