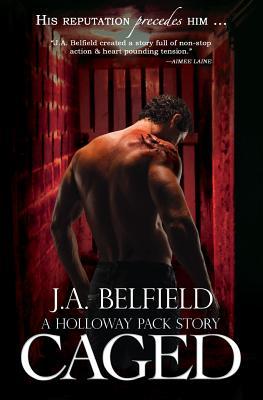 If the meek can become deadly, the strongest can be weak.

For Ethan Holloway, his mission to find a missing werewolf should be simple. Crack a few heads, bust a few chops and the solution always reveals itself. Always.

Ethan's reputation precedes him, and because it does, someone is ready. Waiting. Unbeknownst to Ethan, he's about to go down. Hard. Against a foe he never suspected and in a world he never imagined could be real.

What awaits Ethan is a fight not only for his reputation, but also his pack, his female, and his life. If he survives, damage control will become priority number one.

Because even Ethan's not sure he's strong enough to take on an entire race all by himself.

Especially one hell bent on exposing who and what he is in the name of sport.

I love it when a series gets better with each new installment and J.A. Belfield’s HOLLOWAY PACK is a prime example of that. I’m glad that I stuck with it after having given book one and two, 3 and 4 stars respectively, because following the evolution of this author’s werewolves made me better able to appreciate CAGED for what it is—grade A alpha meat! Ethan’s story is as riveting as his back is gorgeous, and Belfield’s mythology surprised me with its uniqueness which is saying something considering I devour novels in this genre en masse. This series continues to be shelved as Paranormal Romance but its very action-y, to the point that I’d even go so far as to call it Urban Fantasy. Tomato, tomahto—call it whatever you want, CAGED was awesome!

I really enjoyed the author’s twists on werewolves; she takes an unconventional approach to many of this genre’s go-to elements which helped to set this title apart from the countless others on my to-be-read pile. For one, I liked that Ethan’s protectiveness extended to everyone he cares about instead of the common mate-specific trait. It made his character’s alpha-ness all the more believable by playing on pack dynamics rather than on the over utilized insta-love. I also liked how Belfield didn’t just showcase the positive aspects of mate bonds. Jem’s pregnant in this installment and Sean gets to be the first man to experience the joys of childbirth. The woman in me couldn’t help but grin at that!

It was a real pleasure getting to view this book from Ethan’s POV; he’s very… surly, and likes to punch first and ask questions later. Watching him become the target of another supernatural race, and have to rely on more than just his brute strength to free himself and his pack mates was a great testimony to this author’s skill with character development. However, don’t go thinking that Holloway talks his captors to death because he doesn’t; there’s still plenty of werewolf action to satisfy his beast’s thirst for violence. I was taken aback by how little of a role the romance actually plays in this installment. Other than a quick horizontal dance in the earlier chapters, Belfield makes readers wait until the very last page for Ethan and Shelley’s HEA. Towards the end, I was beginning to seriously doubt whether it was going to happen at all!

The overall plot of CAGED is fairly straightforward, kind of a FIGHT CLUB meets Noah’s Arc type thing. Some interesting new secondary characters are introduced, and the author sets things up nicely for Brook and Kyle’s story in UNNATURAL. Being a werewolf fanatic, I tend to shy away from novels that feature cat shifters but after meeting Nicholls, there’s not a doubt left in my mind that I’ll enjoy reading book 4. I’m quite curious about Lauren as well, there’s a lot of mystery surrounding her character, and I’m hoping that we’ll see her again in a later installment. And, then there’s Gabe! I was so worried about him, but fortunately he seems to have survived his ordeal relatively intact. He was trained by Ethan himself, so I have high hopes for him too!

CAGED is more than just a pretty cover—this book tastes as good as it looks!