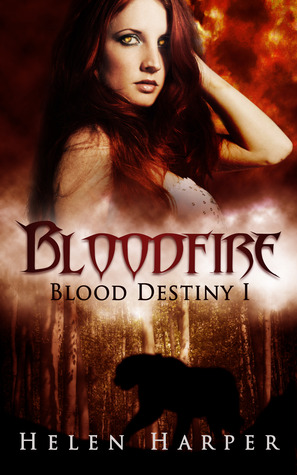 Mack might be, to all intents and purposes, a normal looking human, but she lives with a pack of shapeshifters in Cornwall in rural England after being dumped there by her mother when she was just a young child. She desperately wants to be accepted by her surrogate family, not least because a lot of them hate her for merely being human, but for some reason her blood just won't allow the transformation to occur.

With a terrible temper to match her fiery red hair, Mack is extraordinarily useful in a fight, and when her pack alpha is brutally and abruptly murdered, she swears vengeance. Unfortunately, his murder also draws in the Brethren - the leaders of the shapeshifter world - who will slaughter everyone in Mack's small rural pack if they discover her true identity. Unfortunately Corrigan, the green-eyed muscle-bound Lord Alpha of the Brethren, doesn't let much slip by him...

I’m not really sure how I stumbled across Helen Harper and her Blood Destiny series. I think I was in one of my Urban Fantasy funks (in which nothing but UF holds any kind of appeal, but I’ve read and re-read any of the mainstream, published UF that I’m interested in, and am desperate for new reading material).

Anyway, whether I found it through one of Goodreads “Readers Also Enjoyed” lists, or Amazon’s “Customers Who Bought This Item . . . ” lists, doesn’t really matter. I’m just glad I did.

Mackenzie Smith is a lone human living in a shifter pack. After her mother dropped her on the Cornwall pack’s proverbial front porch (when Mack was a child), and then placed a geas preventing the pack from revealing Mack’s humanity, she grew up not knowing why her mother abandoned her.

And that’s kind of a big deal—the pack is governed by a set a rules and regulations, one of the more prominent rules being basically, “Don’t allow humans to discover our existence on pain of death for E-V-E-R-Y-O-N-E.” But the Cornwall pack is in the country and more stable than other packs, so Mack grows up without being discovered (b/c no trouble equals no interference from the shifters-in-charge: the Brethren).

Or no Brethren interference until the pack leader (Mack’s surrogate father) is murdered.

So of course it’s when Mack is reeling from the loss of the only stable parent-figure she’s ever had that the Brethren shows up to investigate/oversee the appointment of a new Alpha (as per regulations). And this necessitates that Mack remain as inconspicuous as possible to avoid being detected as a human while in the midst of her grieving.

“Inconspicuous” is SO not Mack’s middle name.


And even if it was, it’s difficult to fade into the background when Mack’s blood (literally?) boils when she gets angry or stressed out, which she certainly does when the smokin’ hot Lord Alpha starts taking an interest in her.

I know, I know . . . it sounds exactly like every other UF book you’ve read. “Human” or ordinary girl tries to stay hidden amongst supernaturals, but gets pursued by ridiculously attractive Alpha male, and girl turns out to be not only not human, but a super, special snowflake.

All I can say to that is that it’s popular for reason. AND while the characters/situations may seem stock, the story isn’t. It’s not as obvious in Book 1, but by Book 2 this series becomes something of a Karen Marie Moning’s Fever series/Kate Daniels by Ilona Andrews mashup, and that is not a bad thing to be.

But what really sold me on Bloodfire is the relationships. Mack may be the only human in her pack, but she has true friendships with many of its members. There are a few members that loathe, detest, despise, and abominate her, but bigots suck no matter what they’re being judgmental about, so screw ’em. And while Mack and Corrigan (Lord Alpha of the Brethren) may have insta-attraction, they do not have insta-love

Mack herself is an MC of the kick-ass persuasion which means she not only has super fighting skills, but also super snark. I L-O-V-E snark. It makes me laugh. So does Mack.

The only problems I really had with this series are that Mack has an irrational dislike of pet/nicknames that gets a little tiresome after a while—let it go, dollface. You’ve got more important things to be worrying about (like figuring out what the bloodfire you’ve had your whole life means about what you really are)—and I had to willfully suspend disbelief slightly more than I usually would to believe that Mack truly thought she was an ordinary human her entire life. B/c really? You really think your mother dropped you off with shifters completely arbitrarily? And the “bloodfire” thing never, not once, tipped you off that strange things were afoot?

But ultimately, with a sexy Alpha male, a hilarious surfer-dude mage of a sidekick, an evil-incarnate demi-goddess, and a strong, clever heroine, Bloodfire has all the components of an excellent Urban Fantasy series. Don’t wait until you’re despairing for new reading material to give these books a shot. Learn from my experience and try them now—this indie series is WAY better than a lot of the traditionally published series I’ve read.