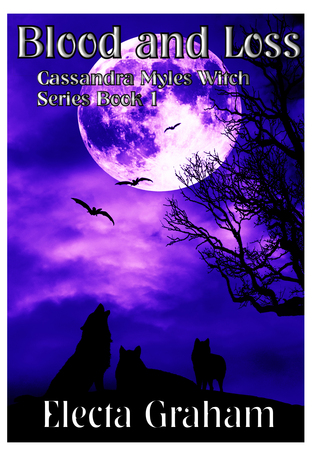 If you lost everything that made you who you are could you recover?

Would you be stronger than before or would you crumble under the mountain of grief?

When Cassandra Myles is faced with this question her answer is to do what ever it takes to move on. She rebuilds her life and finds happiness once again. She doesn't do it alone, she has two very special men in her life, who have been there for her while she has recovered.
One is her boss. His name is Quintus and he is a very old and very powerful vampire. He took her under his wing when she needed someone and now she would do anything to repay that debt.

The other is her roommate Declan. He is caring, charming, gorgeous and in her eyes perfect in every way except one. Cassandra feels they are meant for each other and Declan feels he is meant for every woman who walks in his bar.

Life might not be perfect, but it was filled with possibilities and she was going to meet them with strength, courage and when all else fails a huge dose of sarcasm.
Then Quintus comes to her and tells her what was once lost can now be restored. A painful part of her past can be undone. Will this make her life complete or should some things remain buried.

Ever read a book that you know should have had some things written in a bit different way, BUT you keep reading, and you also want to read the next one? That’s exactly what happened with this book for me.

Cassandra is attending a witch college and is getting ready to graduate along with her closest friend and roommate, Lena. She goes home for Thanksgiving, horrible things ensue, and upon returning back to school, she is told that due to her circumstances(not telling!) she must take her final exam that day. Let’s just say, final exams at a witch college aren’t exactly done on paper, or orally for that matter. Cassandra loses something major after this. The story jumps five years. I had a problem with that. During that time, she is meets a vampire named Quintus, who gives her a job. And he really cares about her. I would have liked to have seen how all that came about and then the story could have jumped. On top of that, Lena has been left behind without another word. Really? Best friends and nothing? Made little sense to me and I loved Lena’s character, so I missed her in the rest of the story. Cassandra has a male roommate named Declan; she wants him but he seemingly doesn’t want her. And then there’s Quintus’s only son Lucius, also a vampire, who really likes Cassandra too. Yes, totally team Lucius here. This ramps up the usual love triangle to something more like a rectangle.

This book ends up being about a witch with some really different powers and along the way, vampires, werewolves, and the Fae are introduced into the story. The character of Cassandra, while I liked her a lot in the beginning, ended up being a bit wishy washy at times-jumping around about who she wants to be with, and generally made me want to yell at her at times. The good thing is no, she doesn’t have sex with all of them. All that being said, I found that the author knows how to write a very readable, and mostly enjoyable story-when I wasn’t wanting to yell at the main character. I wasn’t a fan of some of her choices, to say the least!

It seems like I have told a lot of about the story, but no, not even close. I haven’t even touched on the main premise of the story and I am not going to-that involves spoilers way worse then anything I have mentioned. If you like books with all sorts of supernatural beings, sexual situations, but not what I would consider true erotica, some really good characters-Lucius and Quintus in particular-and an interesting premise, then you may want to try this book. Me? I am buying the next one.

10 responses to “Review: Blood and Loss by Electa Graham”