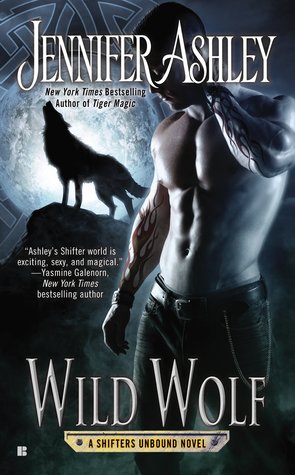 In the latest Shifters Unbound novel, a man has resigned himself to a life half lived. But a beautiful, courageous woman has him longing for something more…

Graham McNeil knows that his pack is unruly, but he’s not sure he can take the next step toward pack stability. After losing his first mate long ago, Graham has worked hard to keep his heart in check. Besides, even if he was inclined to choose a new mate, his girlfriend, Misty, is human—a fact that won’t sit well with Graham’s old-fashioned pack.

But Misty is going through a crisis of her own, one that brings danger and death to the pack. With the wolves doubly convinced that there needs to be a shake-up, Graham must now defend his leadership and save the woman he has grown to love—before Shiftertown is pulled into an all-out war.

I don’t typically dive into a series at the sixth installment, but when Jennifer Ashley’s WILD WOLF landed on my doorstep I couldn’t resist the call of her werewolves. Fortunately for me, this book stands well enough on its own and the writing drew me in to the point of needing to go back, and start the SHIFTERS UNBOUND journey from the beginning. The mythology is well thought out, and is paired with red-hot love scenes and extremely likable characters. Ashley just went from being a new-to-me-author to a must read!

The world-building and lore are the two main elements that caught my interest early on, and are also the primary reasons why I plan on picking-up book 1. I’m sure that there’s way more to the SU universe than what I was able to gleam from only one installment, but the tidbits I did learn made me fall head-over-heels in love with this series. Ashley’s werewolves have been exiled to reservation-type living conditions called Shiftertowns, are forced to wear anti-aggression collars, and are just overall unwelcome among humans. There’s also a variety of different shifter breeds and even subgroups of wolves which made learning about them all a lot of fun.

I was surprised by the author’s approach to the romantic aspect of this story; Graham and Misty have been dating for 8 months, but have yet to have sex, which is practically unheard of in novels that feature mate bonds. And, the two main characters don’t actually get-it-on until quite a ways into the book, but in the interim there’s no shortage of “substitute” options, and these turn-out to be equally as satisfying. I liked that even though she’s human, Misty is far from weak; in fact, she saves McNeil’s alpha-ass not once, but twice! They make a great couple and I thoroughly enjoyed reading their story.

The secondary characters were phenomenal as well; some of the mated pairs have obviously been featured in previous installments, and after meeting them in WILD WOLF, I’m anxious to read their tales. There’s a nice mix of supernaturals in the SU world, and I enjoyed learning about Ashley’s Fae and gnomes (yes GNOMES!). I loved Matt & Kyle—the adorable werewolf cubs—and Reid, Ben, Dougal and Eric were awesome personalities too. It’s clear that this series has a lot of offer; my only regret is not having discovered it sooner!

WILD WOLF is a fantastic book whether you’re a long-time Jennifer Ashley fan or a newcomer like me. Great humour, sexy shifters and outstanding writing—everything a reader needs for hours of enjoyment.