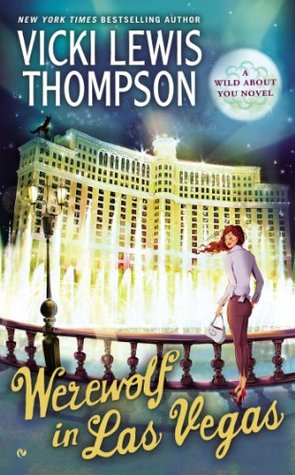 Win it all, or lose it all…

Giselle Landry is in Las Vegas to haul her wayward brother back home. But casino owner Luke Dalton is also looking for her brother, who has run off with his little sister. The two should join forces, but Luke is unaware that Giselle’s brother is also fleeing his duties as the future alpha of the Landry werewolf pack—which includes his Were bride.

The Landrys don’t believe in Weres mating with humans, and Giselle is no exception. Though Luke is wealthy, gorgeous, and protective, Giselle can’t let herself get close to him, even to solve their shared dilemma. But the tension wears away her resistance, and after a wild night with Luke, she is shocked to find she’s fallen for him.

But Luke still doesn’t know Giselle’s true identity. And once their siblings are found, Giselle must return to San Francisco. Can they overcome the odds—or will what happened in Vegas stay in Vegas?


One of the reasons why I’ve stuck with the WILD ABOUT YOU series for as long as I have is because I can always count of Vicki Lewis Thompson’s books to be light and fun. They aren’t groundbreakingly original by any means but in the past I’ve found them to be entertaining. Unfortunately, that didn’t hold true for WEREWOLF IN LAS VEGAS; I found myself connecting more with the secondary characters than the main couple, the plot was so simple that it became frustratingly predictable, and after six novels I’m kind of done with the human / werewolf mating issue that’s been at the forefront of this series. In my opinion, the author either needs to take these books in a new direction or call it quits, and move on to writing something new.

This novel focuses a lot more on humans than werewolves which made it feel more like contemporary romance instead of paranormal. The story is cute but there’s not really much to it; Cynthia and Bryce are bouncing around LA leaving riddles behind for their siblings to unravel, plus a few childish water pranks just for shits and giggles. The overall plot felt trivial, and was just plain silly (not in a good way). I also thought that the author demonstrated a knack for stating the obvious; there was no subtlety involved, and with sentences like “radiate a feeling of togetherness, as if they shared a bond of great significance”, I found it hard not to roll my eyes. All of the characters seemed to always say/do exactly the right thing and precisely the right time which made the whole novel entirely too predictable for my tastes.

The constant theme throughout this series has been the human / werewolf mating debate. In the WILD ABOUT YOU universe there are two factions: those who think the species should mix, and those who think they shouldn’t. At first it was a fun concept, and I especially enjoyed it in WEREWOLF IN DENVER which was by far my favourite installment to date, but I think as a main story arc it has reached the end of its shelf-life. I voiced a similar complaint last year with regards to Katie Reus’ MOON SHIFTER series, and she turned it around by switching tactics in her latest release, AVENGER’S HEAT. So it definitely can be done, I just hope that Thompson realizes that she needs to shift gears before it’s too late.

I’ll be honest, I didn’t particularly like Giselle or Luke, it almost seemed like the author was more focused on setting up Bryce and/or Cynthia’s story for the next installment because the secondary characters were better developed than the two central ones. There was definitely no shortage of sex in this novel—how could there be with extended bonkathons—but Giselle and Luke’s relationship lacked chemistry so even a romp session involving chocolate cake couldn’t save it. Nothing about this book flowed well; not the romance, nor the writing and certainty not the narrative.

I hate to say it but after reading WEREWOLF IN LAS VEGAS I’m beginning to think that this series may be past its prime; if the next installment doesn’t strike out in a new direction, I’m going to seriously consider calling it quits. It’s been a good run but something’s got to give.