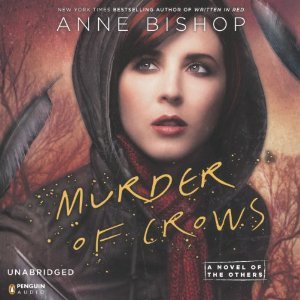 Return to New York Times bestselling author Anne Bishop’s “phenomenal” (Urban Fantasy Investigations) world of the Others—where supernatural entities and humans struggle to co-exist, and one woman has begun to change all the rules…

After winning the trust of the terra indigene residing in the Lakeside Courtyard, Meg Corbyn has had trouble figuring out what it means to live among them. As a human, Meg should be barely tolerated prey, but her abilities as a cassandra sangue make her something more.

The appearance of two addictive drugs has sparked violence between the humans and the Others, resulting in the murder of both species in nearby cities. So when Meg has a dream about blood and black feathers in the snow, Simon Wolfgard—Lakeside’s shape-shifting leader—wonders if their blood prophet dreamed of a past attack or a future threat.

As the urge to speak prophecies strikes Meg more frequently, trouble finds its way inside the Courtyard. Now, the Others and the handful of humans residing there must work together to stop the man bent on reclaiming their blood prophet—and stop the danger that threatens to destroy them all.


Normally I’m not one to turn all fan girl in my reviews. In fact, I pride myself on writing cohesive, thorough feedback with actual words instead of squeals of delight and captioned screencaps. But in this case, I could use all of the above and more, and still not manage to do this series justice. It’s that good. Anne Bishop’s world-building is without parallel; she explores sensitive issues with tact and fineness, and makes you see them in an entirely different light. THE OTHERS’ universe manages to be dark, scary and magical all at the same time—I wouldn’t want to live there, but it sure makes for an absorbing listen! I finished MURDER OF CROWS in record time, and now I find myself unable to start my next listen because all I want to do is go back to the beginning and do it all over again!

I’m surprised by how much I like Meg because she’s not your typical Urban Fantasy heroine; sure she has her fair share of strengths, but she doesn’t mow down bad guys and physically, she’s incredibly vulnerable. I gained a whole new appreciation for her fragility in this installment. Cassandra sangue aren’t known for their longevity, and when every cut has the potential to be her last, it makes each bump and scrape feel life-threatening. I loved watching the dynamics between Corbyn and Wolfgard evolve, and this novel helped give a whole new meaning to “mixed signals.” The romance between them continues to be minimal, but I’m really enjoying just exploring the mere possibility of more.

I expected the world-building to slow down a bit in book 2, so imagine my delight when Bishop introduces even more awesomeness into her already overflowing universe. In the earlier chapters, I had some concerns about the HFL (Humans First and Last) movement having encountered similar plot lines in the past, but the author does such a fabulous job of putting her own spin on it that you never get a sense of déjà vu. Intuits, Skippy and a “snake charmer” type character were interesting additions to this series’ already all-star cast of supernaturals, and I enjoyed delving deeper into Meg’s prophecies too. Despite the story’s somber tone, there continues to be a darkly humorous side to Anne Bishop’s writing; from the terra indigene movies, to people shaped wolf cookies, to wielding a tea kettle & broom as weapons.

Alexandra Harris threw me through a bit of a loop with her change in narration. In WRITTEN IN RED, it was box on wheels or B-O-W and cassandra sangue, but in this installment those terms became BOW and cassandra sang—not major differences, but still noticeable. She reads at a slower pace than I’m accustomed to, although I think her style is well-suited to Bishop’s writing. It really adds a palatable element of danger to the story line, and helps keep listeners invested in the plot. The innocence of Meg Corbyn’s character really comes through in her narration and her wolf sound effects aren’t too shabby either!

Anne Bishop has quite possibly just ruined the next five books on my to-be-read pile because there’s nothing that can conceivably live up to MURDER OF CROWS. This novel is without equal, and the series itself remains unmatched—it’s quite simply, the best audiobook of 2014. 5++ ∞ stars.

49 responses to “Audiobook Review: Murder of Crows by Anne Bishop”