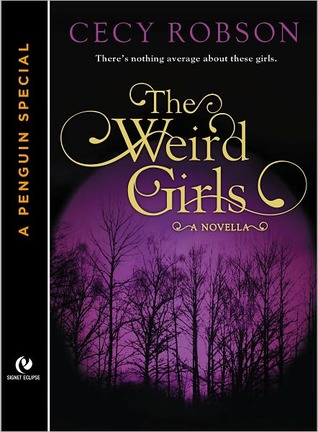 Celia Wird and her three sisters are just like other 20-something girls—with one tiny exception: they're products of a backfired curse that has given each of them unique powers that make them, well, a little weird…

The Wird sisters are different from every race on earth—human and supernatural. When human society is no longer an option for them, they move in among the resident vampires, werebeasts, and witches of the Lake Tahoe region. Could this be the true home they’ve longed for? Um, not quite. After the sisters accidentally strip a witch of her powers in a bar brawl, they soon realize the mistake will cost them. Because to take on a witch means to take on her coven. And losing the battle isn’t an option.

Includes a preview of the first full-length novel in the Weird Girls series, Sealed with a Curse—as well as introductions to the Weird World, and a letter from the author.

One of my GoodReads groups asked members to list their favorite all time paranormal series and at least two people listed The Weird Girls-and you could only pick five. So that got my attention since I hadn’t heard of it. When one of the blogs I follow on Facebook mentioned this series twice in one day, I had to read one. Luckily the prequel, a novella, was out there for me to try.

Celia Wird and her three sisters have moved to Lake Tahoe to finally settle down away from all the people that had bullied them for years, because they were different. And they are all pretty different supernatural beings. A witch’s spell had backfired, leaving all the sisters with very different powers. Celia has an inner tigress that she can let out. But she is not a weretigress. Taren, controls fire and lightening with her hands. Shayna can transform pieces of wood to weapons (among other things)and Emme is telekinetic.

Taren has a temper and gets into it with a witch one night at a nightclub. Celia gets pulled into the fray and when all is said and done, they have made a powerful enemy in the head witch of the coven in Tahoe. A challenge is made and Celia has to fight for her family and their new life in Tahoe. If she loses, they have to give up everything and leave. It’s not long before she realizes that the witch doesn’t fight fair.

My favorite thing about this story was the characters. The author has fully realized each sister and I felt like I knew each of them by the end. The relationship between the sisters, and Celia’s love for her sisters, in particular,was the backbone of the story. The other thing I liked was the humor. Horrific things are happening and then the author deftly manages to lighten the mood. Don’t get me wrong. this is not a comedy. But what it is, is a supernatural story with lots of action and well written characters. It’s also a story of four unusual sisters and their love for each other. Good start to a series and I have already started the next book.

13 responses to “Review: The Weird Girls by Cecy Robson”