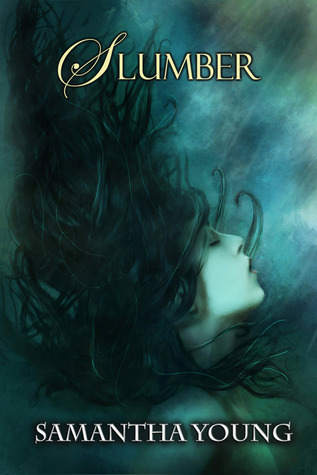 Molded by a tragic childhood, nineteen-year-old Rogan finds it extremely difficult to trust people. Now Haydyn, her best friend and the one person she does trust, is dying and only Rogan can save her.

Setting off on a journey to retrieve the plant that will cure Haydyn and subsequently the ills that will befall them all if she dies, Rogan is stuck in close quarters with a protector she distrusts above all others.

The son of the man who destroyed Rogan’s family.

At a constant battle of wills with the handsome Captain of the Guard, Rogan just knows this adventure together will be fraught with tension. She never imagined, however, that the quest would be so dangerous… not least of all when she finds herself falling for a man she could have sworn was her no.1 enemy…

Slumber by Samantha Young has one of the best first lines I’ve ever read:

“When I was a child the world smelled of summer.”

It’s nostalgic. It’s foreboding. If the world still smelled of summer, of bright things, of happy things, there would be no need to remember what life was like when you were young . . .

Rogan comes from a magical people much like the Fae. They removed themselves from the human world millennia ago after creating a new world—Phaedra. Among her people are the Dyzvati who fill those around them with peace while draining all negative emotions. There are the Glava who have myriad magical gifts, including, but not limited to power over the elements, foretelling and intuition, and telekinesis. Then there are the Azyl who, like Rogan, can be asked to find a thing, anything in the world, and their magic will lead them to it.

Over time magic has begun die out, until only the princess of the Realm, Haydyn, is left of the Dyzvati, who are responsible for keeping the world at peace (or emotionally lobotomized depending on how you look at it). The use of a Dyzvati’s magic is called the Evocation, and while it is weakened after the death of the Kral (Haydyn’s father), an evil man, Syracen Stovia, free to pursue his vices for the first time, seeks out other magic users in the realm. Syracen does this under the guise of securing stability for the young princess, but his method is by indiscriminately slaughtering any who stand in his way . . . including Rogan’s family.

Fast forward eight years, and a now nineteen year old Rogan is the “Handmaiden of Pheadra,” thus named by Haydyn (her BFF). Syracen has been brought to justice years ago (and by “brought to justice” I mean EXECUTED, and good riddance), and Wolfe, Syracen’s son, is captain of the guard.

But when Haydyn contracts the Somna virus, a rare disease in which the victim falls asleep and never wakes (Ohhhhh, the iiiiironnyyy), Rogan demands that someone, anyone (except for Wolfe) command her to find the cure (the believed-to-be-extinct Somna plant), enabling her magic to find it, if it exists.

It does exist, at the mythical Pool of Pheadra, and Rogan is commanded by Haydyn’s advisers to allow Wolfe and 50 of his guard to accompany her on the journey.

Rogan is furious. Because she H-A-T-E-S Wolfe.

And thus begins the best paranormal romance/fantasy book I. Have. Ever. Read.

Slumber wasn’t the first Samantha Young book that I read, but it is my favorite. I looked it up in my Amazon history and over several weeks, I purchased and read every single book she had available. I’ve done that with several indie authors—Kristen Ashley (and that took a while), R.L. Mathewson, and Elizabeth Hunter to name a few—but Samantha Young was the very first.

I remember reading the teaser chapters on her blog for On Dublin Street, and I remember the first time I saw that same book sitting on a shelf in Target. Samantha Young, an independent writer from SCOTLAND, had her book for sale in one of American’s biggest discount retailers<—–THE FEELS.

The point is that I have a special place on the bookshelf of my heart for Samantha Young, and this book is IMO her best. Rogan is the perfect, prickly, know-it-all-who-painfully-learns-she-doesn’t-know-it-all-BUT-is-big-enough-to-admit-it heroine. Wolfe is a leader of the pack (heh) on my the-book-boy-is-mine list. I love the secondary characters, I love the relationship development, I love the individual character growth, I love, love, L-O-V-E the story.

So if you liked Shadow and Bone by Leigh Bardugo, Cinda Willaims Chima’s Seven Realms series, or Kristen Ashley’s Fantasyland series, I order you to immediately purchase and devour this book in one sitting. Then you can be hooked on Samantha Young too.

And if you haven’t read any of those books, but you like Fantasy and/or Paranormal Romance, I highly recommend you give Slumber a go. It’s a perfect blend of both genres, and as indie books are notoriously cheap (this one is like a dollar), even if (youaredeadinside) you don’t like it, you won’t have to regret spending a bunch of your book allowance on a book you didn’t like. The potential gains FAR outweigh the potential losses (IM humble O).