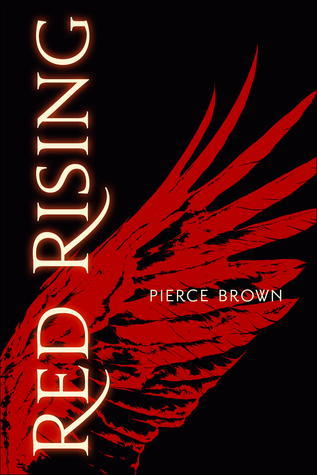 Darrow is a Helldiver, one of a thousand men and women who live in the vast caves beneath the surface of Mars. Generations of Helldivers have spent their lives toiling to mine the precious elements that will allow the planet to be terraformed. Just knowing that one day people will be able to walk the surface of the planet is enough to justify their sacrifice. The Earth is dying, and Darrow and his people are the only hope humanity has left.

Until the day Darrow learns that it is all a lie. Mars is habitable - and indeed has been inhabited for generations by a class of people calling themselves the Golds. The Golds regard Darrow and his fellows as slave labour, to be exploited and worked to death without a second thought.

With the help of a mysterious group of rebels, Darrow disguises himself as a Gold and infiltrates their command school, intent on taking down his oppressors from the inside.

But the command school is a battlefield. And Darrow isn't the only student with an agenda...

Red Rising by Pierce Brown might be the best book in the history of ever.

When I first heard about this book, I was accosted with comparisons to The Hunger Games. By bloggers, by publicists, by other authors . . .

HOWEVER, Red Rising takes The Hunger Games‘ brutality and spits on it. Then jeers and makes rude gestures at it. Then rips off its arms and legs and beats it with them, shouting “Pax au Telemanus!” at the top of its lungs.

Seriously, I would’ve thought it impossible for me to even finish, let alone like, a book with this level of savagery. BUT Brown is clever about it. I didn’t even realize it myself until I was 75ish% finished and looking back through the parts I’d highlighted. And (right) now it’s occurring to me that Brown is even more clever than I originally thought him to be, b/c Darrow (MC) would be struggling with the same issues I was having.

About 30ish% into the book, you enter the third stage, and while the overall feel is still one of horror at the inhumanity of the upper classes, Darrow’s enemies start to become humanized. Funny, nay, downright HILARIOUS things happen, camaraderie develops . . . It creeps up on you until you forget why Darrow is where he is. You’re caught up in the NOW, survival depends on the present, and little thought is given to the past or the future.

And you’re experiencing this so vividly b/c Darrow is too.

Red Rising is about a world run by a caste system. The castes are based on the eugenically modified eye color of a person. But the eugenics are not limited to the color of an individual’s iris, oh no, they have Obsidian elite soldiers that are twice the size of normal men, Violet artists with twelve fingers on each hand to better art (I’m so adjective, I verb nouns) with, and Pinks whose only job is to provide pleasure (ifyouknowwhatimean) for the high-color castes (mostly Golds and Silvers). Pinks who sometimes have wings among other fantastical features created by Violets.

And then there are the Golds. The Golds that are in charge. The Golds that send their own children to an Institute, where if they survive “The Passage” (a sort of enforced Survival of the Fittest), they play a real-life version of Risk. How well they play determines their futures with the victorious team members being assured fame and fortune. There are no rules once the ten month-long game begins, but killing other Golds is frowned upon.

It should be noted that there are worse things than death.

Enter Darrow, a Red from the lowest-level caste. He is a Helldiver, one of the most elite driller/miners who live beneath Mars’ surface, who believes he labors to provide a better future for his people. His job, along with the other Reds, is to mine Helium-3 which is essential in terraforming. The Earth is overpopulated you see, and Darrow’s ancestors were burdened with the glorious purpose of ensuring Mars is habitable for future generations. As soon as terraforming is complete, the Reds will return to the surface as the rightful rulers of the planet that was built on their backs.

I could go on and on (and on) about this book. Though it is (for unfathomable reasons) listed as YA, I can tell you that I will not be getting it for my youngest (14 y.o.) sister any time in the near future. I can also tell you that if you read this book, you will run the full gamut of emotions—I did anyway.

Bottomline: Red Rising is one of the absolute must-reads of 2014.