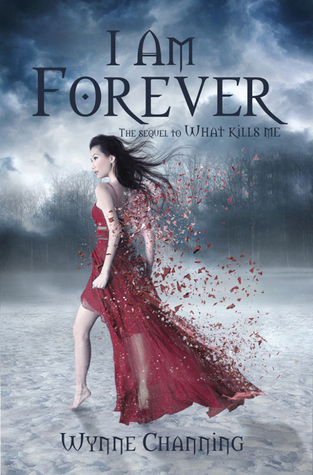 Axelia fought an army of vampires and survived. Once fated as the destroyer of the vampire race, she is now welcomed into the immortal empire and revered as a god.

But instead of relishing her victory, she faces a dangerous new world and an empire at war. Axelia is thrust into the position of supreme vampire and caught in the crossfire of battle. To make matters worse, her role alienates Lucas, the one vampire that she trusts.

Her choices have brutal consequences and her power spawns evil enemies. And they know how to get to her — by hurting those whom she loves most.

Awhile back I read a book called, What Kills Me. It was young adult and about a girl, Zee, who while living in Italy as an exchange student, meets a boy. Except he isn’t just a boy, he’s a vampire. He takes her to a holy shrine and he attacks her. During the attack, she falls in a well full of the blood of ancient vampires. This causes her to become a vampire and almost from the start she is being hunted and attacked at every turn. She meets another young man, Lucas, also a vampire. The book was full of adventure, action, tragedy and a kind of romance. I loved it and when I reviewed it back then, I gave it 5 stars.

The sequel was recently released and I finally was able to read it yesterday. And yes I read it that quickly! Zee and Lucas have defeated the evil vampire general and Zee is now considered the Monarchy’s Supreme Being. Her falling into the well and becoming a vampire was part of a prophecy. If anyone cuts her, then all vampires receive the same cut. If they kill her, then all vampires will die. She is the strongest of their kind and is pretty impossible to kill. Zee, or The Divine as they are calling her, is pretty freaked out about everything. The very Monarchy that had been chasing her for weeks, is now her protector-or are they?

This book starts out just a bit slower then the first one but for me it was still a page turner. While the other book was pretty much non-stop action, this one begins by exploring the new world in which Zee and Lucas find themselves. The world building was pretty amazing. The Monarchy is a self contained, secret world, underground and away from any sun. Of course there are vampires in other parts of the world, but this is their hub. Rebels against the Monarchy are intent on killing Zee, as they don’t believe the prophecy. This sets up the second part of the book, which like the first book, becomes pretty much non-stop action.

Ms. Channing knows how to write a good story. I found the book to be very readable, with a pretty different premise. Her main characters were very likable and Zee in particular talks like a normal teenage girl would. She is very feisty,real and very brave for the situation she finds herself in. However Lucas, being several hundred years old, is not a typical teen. Typical heartthrob, alpha male is a better description for him. He’s also just a nice guy or for sticklers, vampire. The evil empress was a really different sort of character also. The author has drawn her as being very evil but we also get to see a little of why she is the way she is.

If you are interested in reading this, you really need to read the first book before tackling this one. This is not a stand alone book and without knowing the whole story, you will be pretty lost. Make sure you carve out enough time to devote to the read, I found myself up until almost 6 a.m. reading it. I think it is a very good follow up to What Kills Me and since the book says it is a sequel and not book 2, I guess there won’t be another book and that’s too bad because I would like to see what happens next in this world the author has created.

5 responses to “Review: I Am Forever by Wynn Channing”