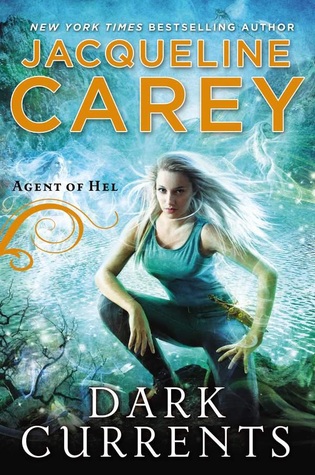 The Midwestern resort town of Pemkowet boasts a diverse population: eccentric locals, wealthy summer people, and tourists by the busload; not to mention fairies, sprites, vampires, naiads, ogres and a whole host of eldritch folk, presided over by Hel, a reclusive Norse goddess.

To Daisy Johanssen, fathered by an incubus and raised by a single mother, it’s home. And as Hel’s enforcer and the designated liaison to the Pemkowet Police Department, it’s up to her to ensure relations between the mundane and eldritch communities run smoothly. But when a young man from a nearby college drowns—and signs point to eldritch involvement—the town’s booming paranormal tourism trade is at stake. Teamed up with her childhood crush, Officer Cody Fairfax, a sexy werewolf on the down-low, Daisy must solve the crime—and keep a tight rein on the darker side of her nature. For if she’s ever tempted to invoke her demonic birthright, it could accidentally unleash nothing less than Armageddon.

I read Jacqueline Carey’s Phèdre Trilogy when I was in the midst of my “Give me High Fantasy, or give me DEATH” phase about ten years ago. It was strange and dark and sexy and disturbing. Only twice in my entire life has a book been so bleak for so long that I was compelled to skip ahead. One of those times was a Phèdre  book. I only skimmed enough text to glean that, yes, the end of the pain and suffering was in sight, and once more reassured, I continued reading, pretending no such weakness ever happened.

I’m happy to report that Carey’s hand at Urban Fantasy is much (MUCH) lighter.

Dark Currents is one of those UF books that, supernaturally speaking, has some of everything–fae, werewolves, vampires, witches, etc.–and all these everythings live openly amongst the humans.

Supernaturals have to live clumped together in a hot spot, overseen by a god or goddess from various pantheons (or they “fade” out of existence). These hot spots frequently become tourist traps, so while human/nonhuman interaction occurs regularly, rare is the human that makes her home there.

Daisy (our MC) Johanssen’s mother is one such human, but out of necessity more than desire. You see . . . Daisy is half-breed HELLSPAWN. Very dramatic, I know. I feel, however, that the drama is lessened by the fact that though Daisy is a half-demon,  she is an Agent of H-E-L (the Norse Goddess of Death), not an agent of H-E-L-L (the fiery inferno).

So anyway, Daisy’s mom vacationed in Pemkowet, MI with some college friends when she was nineteen, and while they were there, they decided it would be fun to mess around with a Ouija board (stupid, stupid, STUPID, have you not seen The Exorcist?). Later that night, Mom’s friends find her hovering mid-air, engaging in . . . ahem . . . sexual congress with a black-winged, horned, glowy-eyed, demon-looking thing. Two months after that, there’s a baby on the way.

A baby that is born with a TAIL. *snorts*

A baby that grows, quite literally, into a DEMON CHILD. *snorts again*

And so Mom moves to Pemkowet where she hopes to, at the very least, gain guidance in raising her daughter. What she finds is community. Fast-forward 20ish years, and we’re in the present where Daisy works as a part-time file clerk at the police station and consults on “strange” cases. One such case is our story.

Now for the hard part.

While, superficially, I liked the characters, sometimes having oodles of supernatural creatures around every corner can be a problem—there are too many of them. Inevitably some characters, Lurine for instance, are fleshed out enough to make an impression as something more, whilst others, like Cody the Werewolf, wind up being mostly a normal person with eyes that glow when he’s angry.

Then there were moments of extreme cheese.

Despite those things, and various nit-picky others, it was still a good read. It was very fast-paced. Even if Cody the Werewolf wasn’t particularly wolfy, I still liked him, and Stefan the Ghoul was downright sexy in that dark and mysterious way (which is vaguely upsetting to me even now—ghouls are creepy). Overall, it was an excellent cast of characters, AND there was lots-o-foreshadowing of an increasingly kick-ass heroine. It’s definitely worth the read, and I’ll definitely read the next book in the series.