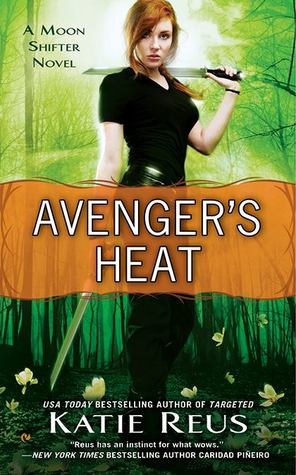 To truly have her, he must free her from her dark secret....

Enforcer Erin Flynn has dedicated her life to protecting her kind. But keeping her heart safe from Noah Campbell, the smoking-hot shifter who saved her life last year, is more difficult. The deadly beauty would love to sink into his arms and become his mate, but she knows she can’t—he must never know about her dark past.

When Erin is sent to investigate the disappearances of pregnant shifters in New Orleans, Erin and Noah find themselves involved in a mystery more sinister than anyone expected. And as Erin delves further into the crimes, chilling information about her own past is revealed. The people who wanted her dead in the first place are trying to finish the job, and Noah wants nothing more than to shield her from harm. But can Erin truly trust Noah and let him see the wounded beast she’s hidden for so long?

AVENGER’S HEAT breathed new life into Katie Reus’ MOON SHIFTER series and was, in my opinion, the best installment so far! Erin Flynn’s story was a long time coming which made the reward feel all the more sweeter when it finally showed-up in my mailbox. I loved learning more about this beloved character, and the change in local and main story arc, were welcome developments. This book also delivers powerful sexual tension and a plot line that’ll keep you enthralled until the very last page.

Reus’ enforcer werewolves are long-time favourites of mine; they are a rare breed of badasses among their kind and Erin has just joined their ranks. Alpha couples are fairly common in paranormal romance but, that being said, as a general rule the males are always slightly stronger. I loved that that wasn’t the case in this book. Flynn is Noah’s equal in all things and her powers are only going to grow in time. I also liked that Campbell wasn’t turned off by that fact; if anything, Erin’s strength only made him want her more. Flynn’s secrets are horrible and heartbreaking but they also helped add dimension to her character and made her HEA immensely satisfying.

Vampires play a large role in this novel’s plot line and I enjoyed learning more about these supernaturals who’ve only played minor parts in this series up until this point. The differences between bitten and bloodborn vamps was interesting and one of their ancient banned practices becomes the driving force behind this book’s plot. I liked that this story took place in New Orleans—it was a nice change of pace from life on the Cordona-Armstrong ranch. You can’t go wrong with non-stop action and this novel starts off running with a paranormal bar fight and ends on a different, yet equally (or perhaps more) satisfying high.

I was happy to see Brianna in this installment; she’s a secondary character that’s popped in and out of this series over the last few books. Her story has been begging to be told and I was worried that Reus was going to pass her by because she’s fae and didn’t really fit into the MOON SHIFTER universe. I suspect that the next novel might revolve around her and Angelo’s story because the lucky girl went and fell in love with a werewolf. They haven’t “officially” mated yet which I hope means that their real HEA is still to come.

Reus’ werewolf series is in no danger of slowing down now that vampires and the fae have joined the mix. AVENGER’S HEAT is a tightly wound package of furry revenge and sexual sizzle that’s sure to make ice melt, even in February!