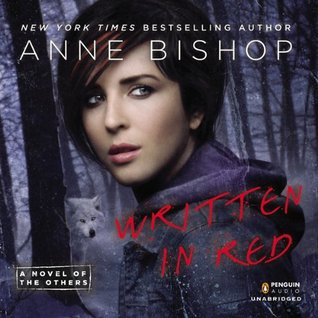 No one creates realms like New York Times best-selling author Anne Bishop. Now in a thrilling new fantasy series, enter a world inhabited by the Others, unearthly entities - vampires and shape-shifters among them - who rule the Earth and whose prey are humans.

As a cassandra sangue, or blood prophet, Meg Corbyn can see the future when her skin is cut - a gift that feels more like a curse. Meg's Controller keeps her enslaved so he can have full access to her visions. But when she escapes, the only safe place Meg can hide is at the Lakeside Courtyard - a business district operated by the Others.

Shape-shifter Simon Wolfgard is reluctant to hire the stranger who inquires about the Human Liaison job. First, he senses she's keeping a secret, and second, she doesn't smell like human prey. Yet a stronger instinct propels him to give Meg the job. And when he learns the truth about Meg and that she's wanted by the government, he'll have to decide if she's worth the fight between humans and the Others that will surely follow.

I don’t usually read a lot of straight-up fantasy but when WRITTEN IN RED showed-up on practically everyone’s year-end top ten lists—my curiosity got the best of me and listening to it became a priority. Werewolves and vampires have been romanticized by the paranormal genre so it was refreshing to see them cast in a purely predatory light. This is the first novel I’ve read by this author but it quickly became clear to me that Anne Bishop is a force to be reckoned with when it comes to world-building. I loved immersing myself in her universe, and with the help of Alexandra Harris’ superb narration, THE OTHERS went from being an unknown-to-me series to a must listen.

Meg Corbyn’s adventures begin when she shows up at the Lakeside Courtyard, fleeing her captors on the heels of a prophecy that foretold her death. Having been confined in a compound all of her life, the heroine’s view of the world is based on images rather than on personal experiences which made exploring THE OTHERS universe through her eyes especially unique. I loved learning more about the cassandra sangue as well as all of the other breeds of terra indigene. Nothing is black and white about WRITTEN IN RED except maybe Meg; her childlike innocence was incredibly endearing. I adored her!

The story has a palpable element of danger to it that makes the audiobook difficult to put down because you constantly want to know what happens next. Despite the dark tone of this tale, there are a few quirky aspects that will end up surprising you later on—everything has a purpose, even the cute ponies! The characters are fantastic and plentiful; from the heroine to cranky Simon Wolfgard, and Winter. I loved Sam, Grandfather Erebus, and even Tess… basically everyone except Asia. I can’t remember the last time a villain infuriated me to the point that, weeks later, just typing her name in a review still makes my blood boil.

I wasn’t blown away by Alexandra Harris’ narration at first, but Anne Bishop’s writing style can’t be easy to convey. As the story progressed she began to grow on me to the point that the possibility of reading the next installment has been taken off the table. Harris does a great job of mirroring the tone of the book and of switching between the multitudes of characters. Her scene transitions were at times somewhat abrupt but overall I enjoyed her delivery.

It’s funny how MURDER OF CROWS, the follow-up installment to the first novel in a series that I originally had no intention of reading has become one of my top most anticipated books of 2014. WRITTEN IN RED is indescribably good and unlike anything I’ve ever read before. Read it, you won’t regret it.

Did you find this review helpful? If so, please consider voting for it on Amazon!

33 responses to “Audiobook Review: Written in Red by Anne Bishop”