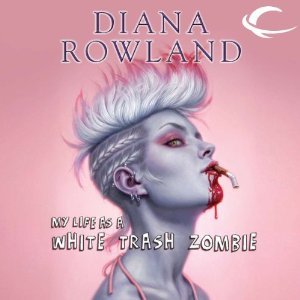 Angel Crawford is a loser.

Living with her alcoholic deadbeat dad in the swamps of southern Louisiana, she's a high school dropout with a pill habit and a criminal record who's been fired from more crap jobs than she can count. Now on probation for a felony, it seems that Angel will never pull herself out of the downward spiral her life has taken.

That is, until the day she wakes up in the ER after overdosing on painkillers. Angel remembers being in an horrible car crash, but she doesn't have a mark on her. To add to the weirdness, she receives an anonymous letter telling her there's a job waiting for her at the parish morgue—and that it's an offer she doesn't dare refuse.

Before she knows it she's dealing with a huge crush on a certain hunky deputy and a brand new addiction: an overpowering craving for brains. Plus, her morgue is filling up with the victims of a serial killer who decapitates his prey—just when she's hungriest!

Angel's going to have to grow up fast if she wants to keep this job and stay in one piece. Because if she doesn't, she's dead meat.


As much as I enjoy watching zombies on TV, they’ve never managed to work their way into my reading rotation until now. Previously, the very idea of a protagonist eating brains freaked me out but the way that Diana Rowland developed Angel’s character has me singing a different tune. I enjoyed the author’s snarky sense of humor and her unique spin on the standard murder mystery story line. Allison McLemore’s narration also helped make this audiobook an especially enjoyable listen thanks to her authentic southern drawl and the ease with which she donned the heroine’s shoes.

I liked the way the author gradually introduced both her readers and Angel to life as a zombie. Crawford has no idea that her world has been forever changed when she wakes-up in the ER after an apparent drug overdose until she receives the first of several notes from her anonymous savior. Slowly uncovering the mysteries surrounding her new condition made the reality much easier to swallow and I always enjoy reading about the growing pains that new supes experience regardless of whether they turn furry once a month or, in this case, eat brains.

Angel is far from being your typical go-getter Urban Fantasy protagonist; she’s a convicted, drug addicted, high school drop-out who lives with her alcoholic father, in short, she’s trailer trash. And, oddly enough, one of the best things that’s ever happened to her is her new walking dead status. Becoming a zombie forces her to grow up and take control of her life because now she has to make sure she eats right, keeps her job and avoids detection otherwise the consequences could be fatal.

The unconventional murder mystery angle was an unexpected surprise; rather than experiencing this book’s plot line from a cop or P.I.’s perspective, Angel has a unique view of the crime scenes because of her job and heightened senses. I enjoyed watching her interactions with the various law enforcement types and how they slowly welcome her into their club even with her checkered background. The twist at the end caught me off guard but I’m happy that it led to a little showdown which had Angel downing brains like Popeye eats spinach.

One of my favorite accents to listen to is the southern twang and Allison McLemore does a fab job of it thanks to her roots. I don’t mean this as an insult but she makes excellent trailer trash! MY LIFE AS A WHITE TRASH ZOMBIE is a fun listen that’ll make you feel differently about eating brains.

What this review helpful to you? Please consider voting for it on Amazon!

22 responses to “Audiobook Review: My Life As a White Trash Zombie by Diana Rowland”